EMPOWERMENT minister Patrick Zhuwao said Saturday that he was disappointed with â€œignorantâ€ Finance Minister Patrick Chinamasa as hostilities resumed between the pair over the governmentâ€™s controversial indigenisation programme. 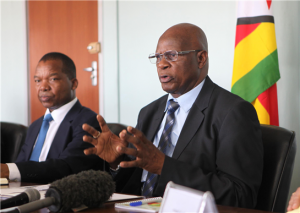 Despite belonging to the same political party and being members of the same Cabinet, the two ministers appear only able to communicate through press statements.

Chinamasa issued a statement Saturday indicating that foreign-owned banks had complied with the indigenisation law.

Not only that, the empowerment minister, who has threatened to shut down foreign companies over the issue, warned Chinamasa that he would be responsible if depositors lost their funds when the banks are kicked out.

â€œ(Chinamasaâ€™s) position puts at risk the savings and investments of depositors and shareholders in an all-ready compromised financial services sector,â€ wrote Zhuwao.

Last month, Zhuwao vowed that he would order out of Zimbabwe foreign companies which fail to transfer to locals ownership of at least 51 percent of their operations by April 1.

Central bank governor John Mangudya then indicated that the financial services sector was compliant with the legislation, adding that â€œwe are satisfied with the level of complianceâ€.

That angered Zhuwao, who called a press conference where he attacked Mangudya, prompting Chinamasa to issue a statement Saturday backing the reserve bank governor.

â€œI am pleased to advise that all the affected foreign-owned financial institutions operating in Zimbabwe have submitted credible indeginisation plans before the deadline of the 31st March 2016,â€ said Chinamasa.

The finance minister only succeeded in further enraging Zhuwao.

â€œI have previously requested my colleagues to desist from making utterances that display their ignorance of the Indigenisation (laws) and advising them that such actions would leave me with no option other than having to force me to correct them in public,â€ wrote Zhuwao.

â€œIt is unfortunate that Honourable Chinamasa has chosen to engage in the media on an issue that ought to have been clarified outside the glare of the public given the sensitivities that may adversely affect depositors and shareholders in the financial services sector.â€

He added: â€œNone of the financial institutions mentioned in Honourable Chinamasaâ€™s press statement satisfy that specific requirement of the legislation. This thus renders them as non-compliant.

â€œI communicated this position to the Reserve Bank of Zimbabwe Governor in a letter to him dated 31st March 2016 which I copied to Honourable Chinamasa and the Chief Secretary in the Office of the President and Cabinet.â€

Discord between the empowerment ministry and treasury over the indigenisation programme is not new.

Saviour Kasukuwere, who followed Zhuwaoâ€™s war-like approach to the policy as indigenisation minister, also regularly clashed with then central bank governor Gideon Gono; the latter arguing that the banks were economically sensitive and needed to be treated with caution.

But there is another dimension to the Chinamasa, Zhuwao public spats.

Zhuwao threatened Chinamasa with dismissal from government when the treasury chief suggested that retrenchment could help reduce the State wage bill which gobbles over 80 percent of government income.

Among the so-called ghost workers in the civil service are thousands of Zanu PF youths added to the State wage bill over the years by the cash-strapped ruling party.

Zhuwao has also criticized Chinamasaâ€™s economic reform agenda, claiming that the finance minister was working with foreign institutions such as the IMF to topple Mugabe from power.

The empowerment minister is said to be one of the drivers of the G40 Zanu PF faction which opposes vice president Emmerson Mnangagwa as possible successor to the 92-year-old Mugabe.

G40 is thought to back Mugabeâ€™s wife Grace, although the President insists that he is not interested in creating a dynasty.