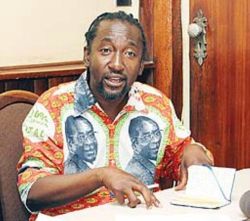 Zhuwao, President Mugabeâ€™s nephew, recently came out in the open attacking Chinamasa for daring announce that banks were complying with the laws, saying the announcement was supposed to have been made by himself and not the finance minister.

Mnangagwa told an accountants conference in Harare Thursday that the bickering between the two ministers had caused â€œconfusionâ€ and unsettled â€œcurrent and potential investorsâ€.

He said, â€œA lot of confusion had arisen with regards the indigenisation policy with the unfortunate effect of undermining the confidence of the business community, including current and potential investors.

â€œThis was due to conflicting interpretations of the policy. His Excellency, the commander in chief of the Zimbabwe defence forces, recently clarified governmentâ€™s position.â€

â€œThe policy was deliberately introduced to empower the historically disadvantaged indigenous Zimbabweans and to grant them ownership and control of the countryâ€™s means of production. The objective is to enable Zimbabweans to be significant players in the mainstream of the countryâ€™s economy,â€ added Mnangagwa.

The controversial laws force foreign owned firms to cede a certain percentage to indigenous Zimbabweans. Mnangagwa told accountants that the 51-49 percentage shareholding requirement in the natural resources sector was no-negotiable, adding the rule did not apply in the financial services sector.

â€œSector-based empowerment credits or quotas will be granted to reflect the contribution of investors in such businesses to national development efforts.

â€œThis will be agreed upon through negotiations involving line ministers and the private investors. The role of the indigensation minister is to coordinate the activities of the line ministries in the implementation of the policy through the relevant cabinet committee which he chairs and not otherwise,â€ said the acting president.