ZIMBABWE clamped down with the enforcement of its controversial indigenization lawâ€”requiring foreign companies with assets of more than $500,000 to transfer or sell 51 percent stake to indigenous Zimbabweans this month. 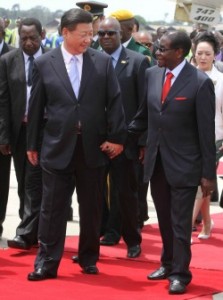 The deadline of April 1 had been set earlier in MarchÂ in accordance with the controversial 2008 indigenization law requiring foreign companies to submit plans for such indigenization or face the risk of closure.

Zimbabwe is serious: According to the minister of youth and indigenization and economic empowerment, Patrick Zhuwao, the government is determined to implement the policy because it was elected in 2013 through â€œpromised indigenisation and empowermentâ€.

As Zimbabweâ€™s largest source of foreign investment, Chinese investors are inevitably impacted. While China has generally tried to dispel the image of the indigenization being targeted at China, it has clearly voiced its displeasure, especially in the case of the diamond mining industry. Furthermore, dissatisfaction is rampant among many in China, who question the solidity and future of the special friendship between the two countries.

According to Chinese statistics, China has been the largest foreign investor in Zimbabwe for years, with total FDI of more than $600 million in 2013. Among all African destinations for Chinese investment, Zimbabwe has ranked top three in the past three years. According to official Chinese media, currently there are more than 10,000 Chinese nationals living and working in Zimbabwe. Many Chinese companies in Zimbabwe are actively engaged in contractor services, including telecommunications, irrigation, power, and construction.

Criticism and opposition to the indigenization plan have been widespread. Specifically, they focus on how the indigenization plan will damage the governmentâ€™s credibility and foreign investorsâ€™ confidence. Â Many people are skeptical that the locals do not have the financial resources to purchase the 51 percent share from foreign investors. The suspicion, hence, is that the indigenization is essentially the governmentâ€™s plan to rip off foreign companies and enrich its cronies. A conceivable economic explanation is that the economic difficulties Zimbabwe has run into due to the sluggish commodity prices have motivated Harare to tighten its control domestically. In comparison, an interesting political deconstruction was offered by former Chinese Economic Counsellor in Zimbabwe, who traced the policy to the revolutionary tradition and the political principlesÂ of the ruling party.

Unsurprisingly, Chinese analysts and observers have termed the indigenization campaign as the new round of â€œredistribution of wealthâ€ targeting foreign investors. The last round happened in 2000 when the Mugabe and his Zanu PF party took over white-owned farms to resettle landless blacks. The government later recognised thatÂ the campaign was a disaster.

Many Chinese companies take a hit

Given that China has been the largest investor in the past few years, many naturally speculated that the indigenization is aimed at China, but Beijing is eager to correct that impression. The current economic counsellor in Zimbabwe made it sufficiently clear in his statementÂ that the indigenization invariably applies to all foreign investors. Chinese analysts went further to point outÂ that the impact over Chinese investors may not be as dramatic as it sounds: Some Chinese mining companies, especially the joint ventures, have already met the 51 percent local ownership requirement; other Chinese mining companies are said to have submitted their proposal for the indigenization to avoid the forced closure; Â furthermore, certain companies, such as the Chinese Tianze Tobacco, have been exempted from the indigenization requirement for making significant contributions to the local economy.

However, such a light-hearted tone hardly covers the breadth and depth of the impact over Chinese businesses. The small Chinese retail businesses that have been operating in Zimbabwe for years are particularly vulnerable to the Harareâ€™s campaign. Many of them had to come up with creative waysÂ to manage the ownership issue and revenue drop.

In contrast, to efforts to downplay the impact of the indigenization plan, the Chinese have been vocal where it really hurts. The displeasure over the diamond mine disputes was voiced directly byÂ the Chinese vice foreign minister directly to the Zimbabwean foreign affairs permanent secretary at their bilateral consultation last week.

The Chinese ambassador to Zimbabwe has protested multiple times in media interviewsÂ and via a public statement, calling for Harare to observe a bilateral agreement on the encouragement and reciprocal protection of investment between China and Zimbabwe and to protect the investment and safety of Chinese companies. The agreement requiresÂ the nationalization not affect Chinese investment as well as demands legal processes and reasonable compensation.

Targeted at China or not, the indigenization policy raises serious questions about the quality, genuineness, and future of the Sino-Zimbabwe friendship. Mugabe has always been seen by China as an â€œold friendâ€,â€ and China has devoted significant resources to the relationship. In 2008, ChinaÂ vetoedÂ a draft U.N. sanction resolution against Zimbabwe for its domestic human rights violations. President Mugabe and President Xi just exchanged state visits in 2014 and 2015â€”an unusual gesture of political solidarity. Key economic agreements were reached during the visits, including a $1.2 billion loan from China to rehabilitate and expand the coal-fire Hwange power plant.

While the result of these commercial disputes is pending, displeasure in China brews. A senior Africa scholar at the China Academy of Social Sciences, He Wenping, commentedÂ that â€œwith the original agreement revoked and initial investment already made, the future revenue of Chinese companies will drop.â€ However, most of Chinese public opinion is bitter about Harareâ€™s desperate attempt to â€œkill the golden gooseâ€ to â€œexpand its profit.â€

Now the April 1 deadline has passed, how accommodating the Zimbabwean government will be toward non-compliant foreign companies remains to be seen. Some Chinese companies are hoping for leniency or at the minimum some industry-specific flexibility in the implementation process. However, as long as Harare is determined to pursue the indigenization, its impact over Chinese investors is only question of time and scale.

Eventually, China cannot blame Harare alone for its investorsâ€™ troubles. And Zimbabweâ€™s indigenization is yet another case of Chinaâ€™s lack of preparedness toward local sovereign risks and a lesson in how to operate in less developed, authoritarian countries with poor investment environment. As has been the case for some time now, Beijingâ€™s dilemma continues to lay between the desire for political/economic ties with an important regional player and the need to deal with that playerâ€™s risky domestic policies and environment. As China pushes forward with its regional development and infrastructure projects under the Belt and Road initiative and in Africa, more challenges of this kind will emerge.