AID agencies say funding remains the greatest challenge to their efforts to provide humanitarian food aid to Zimbabweans who are afflicted by hunger after an El-Nino induced drought that has left up to 4 million people in need of assistance. 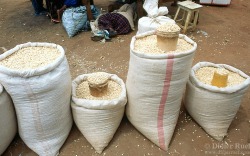 In separate responses to Xinhua early this week, the UN World Food Program (WFP) and United Nations Children’s Fund (UNICEF) said responses to their financial aid appeals had not been encouraging, with WFP facing a funding gap of 200 million U.S. dollars while UNICEF had not received any funds towards its 21 million dollar humanitarian appeal.

The WFP said it had to date received 29 million U.S. dollars towards its 2016/17 El Nino drought response plan, which runs from now through March 2017, out of an appeal for total 229 million dollars.

The WFP said it had available resources to reach some 480,000 people in 13 districts, but due to limited funding, will remain unable to continue providing assistance in the remaining 7 districts to reach its planned target for April of 794,000 people.

Zimbabwe along with other countries in southern Africa was affected by a severe drought this current 2015/16 summer cropping season, which has left a quarter of the rural population facing hunger and in need of food aid, according to a government assessment.

More than 20,000 cattle in the country have also died due to the drought.

UNICEF warned last month that malnutrition was on the rise in Zimbabwe following the drought, and revealed that nearly 33,000 children in the country were in urgent need of treatment for severe acute malnutrition.

It then appealed for 21 million U.S. dollars to meet the humanitarian needs of children in Zimbabwe in 2016.

“As of 14th April 2016, UNICEF Zimbabwe had not received any funds to the appeal,” it said.

Without immediate funding, UNICEF said it will not be able to continue to respond to the protracted drought situation or other humanitarian needs with critical health, nutrition, HIV and AIDS, education and child protection services.

UNICEF, however, said it had in the meantime availed existing resources worth 688,000 U.S. dollars to continue its response interventions to the current drought situation.

Reports from FEWSNET, a provider of information and analysis on food insecurity, indicated that the rains received in Zimbabwe since early March have increased, resulting in improved pasture conditions and water availability across the country.

Although this had helped boost growing conditions in areas where crop conditions are fair, the majority of the drought-related crop damage is irreversible at this point in the season.

President Robert Mugabe in February declared a state of disaster for the 2015-2016 agricultural season.

Agriculture is Zimbabwe’s pillar industry and accounts for a significant share of the country’s export earnings. The output of tobacco, the primary export product, is estimated to drop 15 percent this year due to the drought.

As Zimbabwe battles to mitigate the impact of drought and in particular address malnutrition, the government said it would start offering supplementary feeding to school pupils when schools open for the second term next month.

The government has since launched an appeal for 1.5 billion U.S. dollars in food aid to avert mass starvation in the country.

China is the first country to respond to the appeal. In March, Chinese Ambassador to Zimbabwe Huang Ping announced the donation of 24.6 million U.S. dollars worth of rice as “emergency food assistance” to Zimbabwe.

China stood ready to provide Zimbabwe with more food aid based on the country’s needs, Huang said, adding that the food aid was three times more than the food aid that the Asian country donated to Zimbabwe in 2014.

Sources within the embassy confirmed that preparation for the shipment of the donation is underway.