Zimbabwe needs all the help it can get, so if it believes a mythical sculpture can bring fortune, we should return it, writes Shannon Ebrahim. 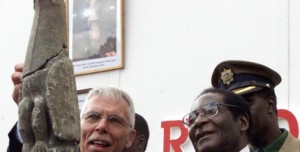 Credit: REUTERS
Zimbabwe’s President Robert Mugabe admires the rejoined halves of a prized soapstone sculpture with German ambassador Peter Schmidt in Harare in 2003. Now Zimbabweans would like the eighth and last bird back from Groote Schuur. File picture: Howard Burditt

Julius Malema, I have a new slogan for you: Give Back the Bird! Many Zimbabweans believe that their country will never experience good fortune or return to its former glory until its eight mythical soapstone birds are reunited.

There has never been a time when Zimbabwe was in greater need of good fortune.

The country was just listed as the poorest country in Africa with a per capita income of $200 (R2 965), compared to that of Mauritius, which is $21 700, according to the Africa 2016 Wealth Report released this week. This is the country of the Great Zimbabwe ruins – a testament to Zimbabweâ€™s ancient African civilisation and culture. This is also the country that once was the bread basket of the southern African region.

Zimbabwe is in possession of only seven of its eight birds, which were found in the ancient ruins of its lost city that dates back to the 11th century. The eighth bird sits in Cecil Rhodesâ€™s bedroom in Groote Schuur, which is now a museum on the presidential estate in Cape Town. Zimbabwean President Robert Mugabe had called Rhodesâ€™s possession of the bird â€œruthless cultural plunderâ€.

Mugabe hailed the return of a fragment of the seventh bird in 2003 from a German museum, and promised to speak to then-president Thabo Mbeki about returning the eighth bird so that all Zimbabweâ€™s precious birds could be reunited.

Today it is felt by many Zimbabweans that the removal of the birds is, in part, responsible for the silence and anger of the ancestors and the desecration of the ancient site.

The original carved birds are from the ruined city of Great Zimbabwe, built by ancestors of the Shona starting in the 11th century and continuing for over 300 years. Modern Zimbabwe is named after the ruins, replacing the colonial name Rhodesia, which Rhodes created for the country north of the Limpopo, naming it after himself.

Artefacts discovered at the Great Zimbabwe ruins suggest that it was the hub of an extensive global trade network as ceramics and glass vases seem to have come from Arabia, India and China.

European colonialists discovered the soapstone birds in the late 19th century. The hunter and explorer Willie Posselt was the first colonialist to have seen one of the carved birds and removed it. He traded it at the time for a few blankets, cut the 40cm sculpture off its 90cm-tall pedestal, and took it to the Cape where he sold it to Rhodes.

Theodore Bent then discovered four more birds and a fragment of another, and took them to a museum in Cape Town.

The local Zimbabweans were furious at the cultural theft, but the colonials had threatened to destroy their homesteads.

Richard Hall, the first curator of the Great Zimbabwe ruins, had found two more birds, making a total of eight.

The sculptures are particularly interesting as they combine human and avian elements, substituting human features like lips for a beak and five-toed feet for claws. The birds had been installed on the walls and monoliths of the ancient city, possibly in the image of the Bateleur eagle, which has spiritual significance among the Shona today. Its significance is the subject of much debate among historians.

Rhodes was obsessed with the mystical bird, even incorporating its image into the wooden staircase of his home, Groote Schuur. Historians say Rhodes regarded the bird as his personal totem and made major decisions in its presence. He even used it to convince business associates that there was a lot more to the â€œnorthern hinterlandâ€ than they imagined. He was the only private individual to have owned one of the eight birds.

The process of reuniting the birds has been an arduous one. In 1907, a German missionary had in his possession the pedestal of one bird, which he sold to the Ethnological Museum in Berlin. When Russian forces occupied Germany at the end of World War II, the bird was taken from Berlin to Leningrad, where it remained until after the Cold War when it was returned to Germany. In 2003, the German museum returned it to Zimbabwe.

In 1981, a year after Zimbabweâ€™s independence, the South African government returned four of the birds. The eighth bird, however, remains at Groote Schuur despite Zimbabwean protestations.

Letâ€™s face it, Zimbabwe needs all the help it can get, so why not just give back the bird! If we removed Rhodesâ€™s statue from the University of Cape Town, then surely giving back to the Zimbabweans what is rightfully theirs will right a historical wrong, and perhaps even open a door to greater political and economic fortunes. The question will be if the bird has the power to make retirement look more attractive.

*Ebrahim is the foreign editor of Independent Newspapers