Harare the defending chess champions of the National Scholars chess championships won it again at Matopos High school in Matabeleland South Province. The tourney was held from the 29th of March- April 2nd. Ten provinces took part in this tourney with a maximum of twenty players per age group. 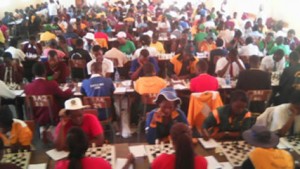 There were under 13,14,15,16,17,18 and 20 both boys and girls. It was really a chess fiesta of the year which Harare Province again proved that they are real champions. Team Harare won 5 Gold medals ,3 silver medals and 1 bronze medal.having a total of 9 medals.
In second place was Bulawayo Province which had 2 gold medals, 4 silver and 3 bronze medals, while Midlands Province came third with 2 gold medals,2 silver and 5 bronze medals. Mashonaland Central won 4 medals, 1 gold i silver and 2 bronze medals. Mashonaland East Province won 3 Provinces won by Hazel Ruzani gold for the under 14 girls which was decided by a tie-break after there were six players tied on the first place after four rounds of play.
Tinashe Mapfumo won a silver medal for his province followed by her sister Theresa Mapfumo who came third in the under 13 girls category completing the medals for Mash East province eventually finishing in the fifth position.
Mat South came 6th with two medals one gold medal and silver medal. Pumuzile Moyo won a gold medal for them.Mash West won two medals as well one gold and silver coming position 8. While Masvingo province who were led by Kudzai Mhandu won two medals gold for Kudzai after play-offs for the first position in the under 15 boys and a bronze medal .Manicaland came 9th with two medals one silver and bronze respectively.
Mat North came tenth with no medal.Greenwell Chimanya of Prince Edward school as well as Harare won his under 20 boys age group with a perfect score of 7/7, so was Farai Hamandishe in the under 16 boys category. Masheia Dzimba of Oriel Girls came first in the under 20 girls category . Mukai Mahachi came first in the under 18 girls category, WCM Kundai Murinda also won a gold medal in the under 15 girls category. While Roy Mwadzura of Oriel Boys won a silver medal in the under 17 boys category, Gamuchirai Chekera of Dominican Convent school won silver in the under 14 girls after play-offs only losing to Hazel Ruzani of Goromonzi High school.
Brendon Jobe was also a silver medalist in the under 15 boys category after losing to Kudzai Mhandu in the blitz play-offs after they had been tied up on position one.Muchimwe, T came third in the under 13 boys boys category. These were the medal winners for Harare province.Bilawayo’s FM Sifiso Ncube who suffered a set back when he lost to a boy from Mash West, he eventually won the tie-break so was the under 18 age group which was one of the toughest groups.Anotidaishe Kufa was the second gold medalist for Bulawayo, he dominated in the under 17 boys category and came clear first.
Panashe Zimbili of Mupfurudzi primary school shocked the secondary school girls when she won a gold medal in the under 13 category. She won all her 7 games in style. The winners of the under 14, 16, and 18 will represent Zimbabwe in Port Elizabeth, South Africa sometime in August this year. The odd numbers under13, 15 and 17 will go to Zambia for the Africa schools Individuals chess championships to be held in Lusaka.The Tournament Director was Mr Madyangove of Mash East, Chief Arbiter for the tourney was Blessing Jemani who was assisted by yours truly and other teachers form the ten provinces.
The Heads in charge of chess from the ten provinces also converged at the same venue.The game of chess is gaining popularity and one can just hope for a day that we will be able to boost of an International Master as well as a Grand Master a feat which we as Africans are finding it very difficult to achieve. In Southern Africa we only have two Grand Masters Kenny Solomon of South Africa and Amion Simutowe of Zambia.. Zimbabwe now looks upon Makoto Rodwell and Mandizha who are both IMs.
Meanwhile Zhemba Zhemusse and Chitumbo Mwali were tied first in the Easter Open held at Causeway during the Easter holiday. Zhemba won it on butcholtz though they were tied first.WIM ANZEL of South Africa won the ladies section while Kudzai Charinda came a credible second with 7,5 points so was Valentine Pasipanodya. Kudzai defeated Colleta Wakuruwarehwa in their game so was Linda Shabba. Refiloe Mudodo was the best scholar followed by Rumbidzai Mawire. Elton Mhangarai and Munashe Ziome ran the event.
Post published in: Sport