A MBARE man caught with a dead pangolin in his refrigerator over a month ago was Wednesday slapped with a mandatory nine years imprisonment. 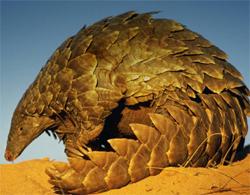 Henry Makunde, 38, was sent to jail after a full trial in which Harare magistrate,Â Tendai Mahwe, ruled that there were no special circumstances.

Makunde was denying charges arguing that he was not directly involved in this crime as he was only aware that his nephew from Chipinge had the pangolin which he kept in his refrigerator.

The nephew, Desire Murire, 19, was sentenced to an effective two years after the magistrate ruled that his age was a special circumstance.

Murire was initially sentenced to three years in prison of which one year was suspended for five years.

Their co-accused, Dingani Dhliwayo, a tenant at Makundeâ€™s residence, was discharged at the close of the State case because he had no connection to the crime.

Prosecutor, Francesca Mukumbiri, proved that in January this year Murire stumbled upon a pangolin in Chipinge woods.

He immediately called his uncle Makunde informing him of his discovery. Makunde ordered the teenager to safely guard the pangolin until he arrived at the scene.

The pangolin was transported to Mbare. On January 22, detectives received a tip off that someone was in possession of a pangolin.

Acting on the follow up, detectives teamed up with Mbare police crack team and proceeded to Marowa Shopping Centre.

The cops found three men discussing about the pangolin and pounced on them.

The police were led to No. 9 Chitiyo Road in Mbare where they discovered the pangolin in the refrigerator.

Trying to shift the blame, Makunde told the police that the pangolin belonged to his nephew and that the owner of the refrigerator was his tenant, Dhliwayo.

The trio was arrested and the dead pangolin was taken to Parks and Wildlife Authority.