At first listen, the humble mbira or thumb piano seems to be a simple artifact of global music. But catch the hypnotic grooves of Mbira Renaissance and you get a hint of the instrumentâ€™s ancient significance in the Shona culture of Zimbabwe. 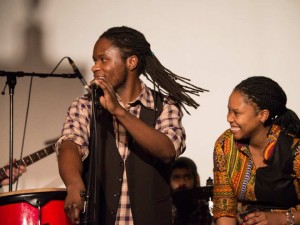 For Zimbabwe-born Chaka Zinyemba, itâ€™s a touchstone to his ancestral traditions and stories, while the gently simmering momentum behind the bandâ€™s inspired dance grooves serves as a perfect inroad to the roots of South African music for the groupâ€™s co-founder, bassist James Stuart.

â€œBack in Zimbabwe, the mbira was kind of neglected or forgotten for a time,â€ Zinyemba explains. â€œBut more recently, people are starting to kind of reclaim that part of our past and the musical rhythms and songs that go with it. So the instrument is having a comeback or a renaissance.â€

On one level, Edmonton-basedÂ Mbira Renaissance is a hip South African dance band. But â€œwithÂ electric instruments like guitar, bass and drum set, I guess we have some of the same ingredients of a lot of other bands,â€ says Stuart. â€œBut the polyrhythms actually get pretty complex. When you listen closely, you hear that it really does revolve around the mbira at the centre of it all.â€

Itâ€™s been over three years since Zinyemba and Stuart were introduced to each other by former Folkways Alive! director Jon Kertzer. Their friendship soon led to forming the group. Since then, theyâ€™ve gone on to perform regularly at the Works Festival, North Country Fair, Muttart Conservatory and various University of Alberta festivities.

The original six-piece lineup began recording their half-hour, five-song debut EP in late 2014 at Riverdale Recorders and had it pressed to CD a few months ago. The title Tisvikeiwo is a notice of oneâ€™s arrival, a sort of affirmative greeting in the Shona language.

Most of the lyrics and repeating vocal riffs are in the Shona language, though the group is gradually integrating some English. Zinyemba explains that their repertoire mixes original songs about life in Zimbabwe and Canada, themes of struggle, politics and love songs with a few traditional songs from his roots.

Variations on the thumb piano have surfaced across Africa and elsewhere under many names. Zinyemba plays a large ancestral version known as mbira dzavadzimu, which is now the national instrument of Zimbabwe.Â His has 21 keys and is also wired with a built-in electric pickup for amplification in performance.

Zinyemba has even made mbiras from scratch in a small foundry in British Columbia, hammering out the keys from old bed-springs or other sources of metal.

â€œItâ€™s a much more complex process than I ever would have thought. When youâ€™re hammering out each key, it takes a long time to get the correct tone and undertone, so I really gained a greater understanding and appreciation of the expertise that goes into making these instruments.â€

Mbira Renaissance can feature up to eight players, with Zinyemba and another Zimbabwean Ronald Nyandoro both on mbira and vocals, James Stuart on bass, Sandy Ockenden on hosho (shakers), Chakaâ€™s sister Rumbi Zinyemba and his wife Chiedza Nezungai on vocals and conga, set drummer Vinay Jhass, and new guitarist Mike Campbell on jazzy guitar.

Born and raised in Zimbabweâ€™s capital Harare, Zinyemba grew up singing in choirs and began learning to play mbira in his mid-teens. He came here at 18 to take a degree in human geography at the University of Alberta. Today, he works for the Alberta government, making music in his off-hours and maintaining close ties to the 2,000-plus members of Edmontonâ€™s Zimbabwean community.

This August, Mbira Renaissance is booked to play their first out-of-province show at ZimFest, a special celebration of Zimbabwean culture in Oregon.