In last weekâ€™s blog, we saw how â€˜structural violenceâ€™ and deep patterns of inequality and marginalisation, affected by patterns of social difference â€“ of gender, age and ethnicity â€“ have influenced who gets exposed to trypanosomiasis (just as is the case with other diseases, such as Ebola). 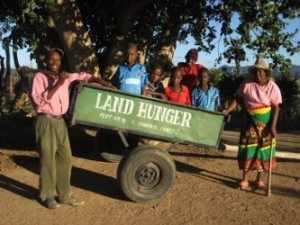 This week, the theme is continued, by looking at how migration into the area has created both dramatic land use change and changing patterns of vulnerability to different social groups. Migration has radically changed landscapes in the Zambezi valley over the past 30 years, as large numbers of new people moved into what were once sparsely populated areas.

As people have moved into the valley to farm â€“ first cotton, now increasingly tobacco â€“ they have cleared land for fields and homes. Initially animals suffered badly from trypanosomiasis, but this declined after a while, as cleared areas were created through intensive control efforts. The work of the Tsetse Control Branch, and projects such as the RTCCP, funded by the European Union, helped. But such control was always partial, and risks increased as people settled in new areas.

In the 1980s and 1990s people moved from the overcrowded communal areas to the south. Unable to make a living on shrinking land sizes and in the context of the absence of a substantial land reform programme. From the 1990s, following a structural adjustment programme that shrunk the economy and reduced job opportunities, people had to find other means of making a living, and migration to new lands was one response.

In the late 1980s I was living in Zvishavane district in the central-south of the country in a communal area. From our sample, several people made the move to go and settle elsewhere (in Gokwe, Muzarabani and beyond). They were relatively young men with their families who had been granted very small fields, and had greater ambitions. As employment opportunities shrunk, carving out a new life on the land frontier to the north was increasingly appealing. As the boom in smallholder cotton growing occurred, news travelled back, and more left.

On arrival, it was a harsh existence. New fields had to be cleared from pristine bush, wildlife were a constant threat, and theÂ tsetse fly was ever-present in the newly settled areas, constantly threateningÂ the health of both people and animals. Today,Â the settlers from 20-30 years ago are now established, have cleared land (and so tsetse flies), and many are currently prospering from the tobacco boom. Well connected to political elites, these now 50-60 year olds are mostly no longer part of the vulnerable population that they once were.

But today, a new group of migrants has arrived, and they are especially vulnerable to disease, again being pushed to a new fly-infested frontier. With land reform in 2000, the Karoi farms to the south of our study area were taken over, and transformed into land reform settlements. In this area, many well positioned political figures took over the large, (mostly) tobacco farms, although there were also subdivisions to create A1 farms for many more people.

In both cases, farm workers who had lived on these farms for generations, often in appalling conditions, were expelled in numbers. Thousands had to seek other alternatives to farm wage labour. A few had connections elsewhere in Zimbabwe, but many were second or third generation â€˜foreignâ€™ migrants, originally from Malawi, Mozambique or Zambia, with nowhere to go. They had been isolated through the form of â€˜domestic governmentâ€™ so well described by Blair Rutherford in these very sites, and were almost completely reliant on the white farm owner.

With the economy nose-diving due to a complex combination of gross economic mismanagement, capital flight and economic sanctions from western governments, after land reformÂ many fled north to our study sites in the valley in search of land for farming, or for hunting and gathering. The local chiefs had already accommodated huge numbers of others in the previous years, where were these new arrivals to go? Eager to expand their territory and increase numbers under their rule (and so acquire increased remuneration from the government), they placed them along the frontier of the national park, and even, illegally, into the buffer area. Acting as a human and livestock shield for others in the now cleared core areas, they provided political and economic benefits to local elites, while in the process taking the brunt of disease impacts.

Thus the disease landscapeÂ has over time been radicallyÂ restructured by migration, and the demand for land. Understanding disease is not just a biological-epidemiological task, but one that must take account of wider political economic factors â€“ such as the state of the economy, opportunities for employment, land reform impacts and more. Diseases such as trypanosomiasis are always inevitably political.