TWO wealthy Zimbabwean businessmen have been named in the Panama Papers that detail how businesses, politicians and prominent individuals circumvented sanctions and avoided tax through the formation of shell companies. 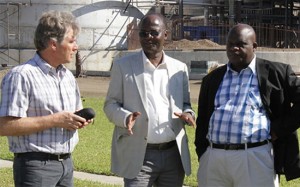 Billy Rautenbach is viewed as a top ally of Zimbabwean leader Robert Mugabe while tycoon John Bredenkamp was sanctioned by the US Office of Foreign Assets Control (OFAC) for allegedly being a â€œcronyâ€ of the veteran Zanu PF leader and a â€œwell-known Mugabe insider.â€

Rautenbach is the driving force behind the Green Fuels project, Zimbabweâ€™s sole ethanol producing plant at Chisumbanje, and also owns various properties in the country.

It is mandatory for all petrol sold in Zimbabwe to be blended with ethanol from Chisumbanje.

Bredenkamp was on the firmâ€™s books since 1997 but the relationship ended in 2009. The tycoon had been described in 2002 by a United Nations as â€œexperienced in setting up clandestine companies and sanctions-busting operations.â€

In 2008, months before Mossack Fonseca cut ties, Bredenkamp was sanctioned by OFAC for allegedly being a â€œcronyâ€ of Zimbabwe dictator Robert Mugabe and a â€œwell-known Mugabe insider.â€ He has consistently however, rejected allegations concerning him and his companies and has denied having supported President Mugabe.

For his part, Rautenbach is named in the documents through Ridgepoint Overseas Developments Ltd.

The leaked documents have drawn the ire of authorities in Zimbabwe, who want companies and individuals named in the papers to be probed for tax evasion. A government official told Fin24 on Tuesday that the issue would be taken up by the central bank and the tax authority.

â€œForeign Exchange regulations may have been violated by both the companies and the individuals and the central bank will take this up.

Foreign currency externalisation has become a major worry and tax authorities will be instructed to look into this in detail,â€ said the official, declining to be named.

Rautenbachâ€™s company allegedly listed Mossack Fonsecaâ€™s office in the British Virgin Islands as its official office address and was on US Sanctions against Zimbabwe until about 2014.

However, the Panamanian law firm denies that it dealt with the company knowing of its alleged ties to Zimbabwe.

â€œIf for some reason, unbeknownst to us, some company formed by us ended up in the hands of people having such relations for whatever criminal or unlawful purpose, we strongly condemn that situation and… will continue taking any measures that are reasonably available to us,â€ Mossack Fonseca said in a statement on Monday.

The Voice of America has quoted Reserve Bank of Zimbabwe governor John Mangudya as saying: “Violation of exchange control rules and regulations is a punishable offence.”

Rautenbach, who was not reachable for comment, is believed to be behind the dropping of Zimbabwean real estate companies by the law firm in 2015 after a memo, citing â€œrecent changes in our organizationâ€ and â€œregulatory mattersâ€, instructed the removal of more than 30 risky businesses from its clientele base.

He is described as a controversial Zimbabwean businessman who has parlayed his closeness to the Zanu PF government into a personal fortune and has an aura of untouchability – despite being a fugitive for a decade.

He fled South Africa shortly after the then Investigating Directorate for Serious Economic Offences launched a raid in November 1999 on his Wheels of Africa Group, which included Hyundai Motor Distributors.