Chimoio (AIM) â€“ The Mozambican police on Monday morning shot dead two gunmen of the rebel movement Renamo whom they surprised in an attempt to sabotage a bridge at Honde, in Barue district, in the central province of Manica. 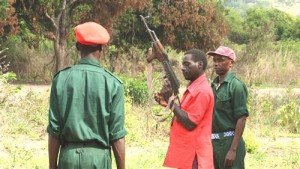 The bridge is on the main road between the Manica provincial capital, Chimoio, and the western city of Tete. The two men killed are believed to have been part of the same Renamo gang that sabotaged the road on Sunday by digging a trench across it.

The Manica provincial police commander, Armando Canheze, told AIM on Monday that the units of the defence and security forces sent to maintain order in the Honde area were informed of the plan to sabotage the bridge. When they prevented the sabotage, there was an exchange of fire, and two of the Renamo group were killed. The police recovered their bodies and weapons later.

â€œItâ€™s trueâ€, said Canheze. â€œWe shot two men who, in the company of others, tried to sabotage the bridge on national highway EN7, specifically in the Honde region. The dead men were found with two firearms. One of them was a youngster and the other an adult.â€

Canheze said that police patrols are under way in Honde in an attempt to capture other members of the Renamo group.

The Sunday sabotage involved digging a trench across the road that was about a metre wide and 50 centimetres deep. Cars and trucks were unable to use the road at this point, and while they were immobilized two articulated trucks and a car were attacked and set on fire by Renamo.

Traffic was halted for about six hours, but was re-established on Sunday afternoon, after a team from the provincial public works directorate had filled in the trench.

Meanwhile, in Chimoio, according to a report on the independent television station STV, unknown assailants attacked three Renamo offices, stealing computers and money, and setting the premises on fire. Local Renamo officials were swift to blame the ruling Frelimo Party for the attacks.