MUTARE â€“ The on-going strike rocking the embattled National Railways of Zimbabwe (NRZ) has reached new heights as spouses and children of the workers have joined to support their breadwinners who have gone for over 15 months without pay. 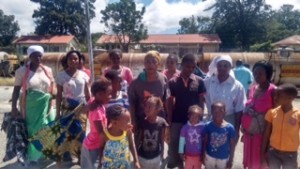 NRZ spouses and children join their breadwinners in the on-going strike.

When The Zimbabwean visited the NRZ provincial station in Mutare, close to 300 of its approximately 450 workers accompanied by their spouses and children, vouched to stick to their guns until their demands have been met.

The workers joined their counterparts in Bulawayo and Harare in the nationwide strike that threatens to bring the troubled national railway to its knees. The national railway company has been making monthly losses of $17 million at a time it owes its workers $55 million.

Having observed the threat posed by the strike, Minister of Labour and Social Welfare, Priscilla Mupfumira issued a 24 hour ultimatum threatening NRZ workers to report back to work.

However, the workers scoffed off at what they termed a bias decision made by the minister.

â€œI donâ€™t know how she managed to come up to that position, her ministry clearly spells out her duties, she is supposed to look both at labour and social welfare issues. But here she chose to prioritise labour in favour of the company and ignored her social welfare responsibilities.

â€œHow are we going to report back to work without receiving payment for the past 15 months, would she have done the same if she was in our shoes,â€ quipped one worker who requested anonymity in fear of victimisation.

Another worker echoed the same sentiment indicating that they will not be moved by the ultimatum.

â€œGentlemen letâ€™s be clear here, we are sticking to our guns. We are not moved by what the minister said. If she has anything to say regarding our situation, she should address us in person not appearing on television. What is she afraid of?â€ questioned another elderly worker.

The workers said they decided to bring their families to witness how they have been short-changed by their employer.

Spouses and children who spoke to The Zimbabwean said they were in solidarity with their breadwinners.

â€œThere is no peace at home. We no longer enjoy our marriages. I used to think that my husband was spending money with other women but I now understand what he is going through. NRZ and government should be sincere enough and pay our spouses their dues,â€ said one woman.

The spouses indicated that they are failing to raise exam and school fees for their children, settle rentals and currently swimming in a pool of debt.

Andrew Bakasa, in charge of operations in the eastern region could also not respond directing all questions to Masikati.

NRZ national spokesperson said the workers should take note of the 24 hour ultimatum issued by the minister.

â€œThey should be aware of the (24 hour) ultimatum issued by Minister Mupfumira,â€ he said indicating that he could not give further details before assessing the situation after being informed that the workers vouched to defy the directive.

The permanent secretary in the ministry of Transport Munesu Munodawafa is on record warning that NRZ has a huge and strong workers union, which is costly to retrench.

NRZ has been saddled with a myriad of challenges ranging from a deteriorating rail-line measuring 1,900 kilometers, ageing signaling infrastructure, locomotives and wagons coupled with one strike after the other.

It has 168 locomotives with the youngest aged 45 years old while its life expectancy is between 20 to 25 years.

The railway company also has 8,600 wagons, of which less 3,500 are still in use. The wagons have also doubled their life expectancy as they are now 50 years old.

Munodawafa attributed the loss to the railway companyâ€™s huge fixed costs and strong labour movement that forced it to keep its workforce.

However, owing to several challenges faced by the company, it is managing a mere 3 million tonnes with a huge workforce of 4,500 as it cannot meet the huge retrenchment packages issued by the Labour Court.