Without fundamental political and economic reforms and the emergence of an inclusive democracy in Zimbabwe, no lasting economic solution can be found no matter how much money the IMF may throw at the problem. 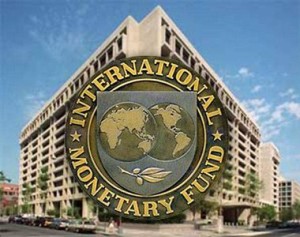 For many years the IMF has been the principal instrument of foreign governmental development capital in Africa and yet to this date, Africans remain poor. In fact 2, 5 trillion dollars and 50 years later, there is no evidence that any of their policies are working. In fact some of their economic prescriptions have exacerbated poverty and underdevelopment especially in Africa.

There is no evidence that the IMF has facilitated the emergence of sustainableÂ  economies and eradicated poverty and corruption anywhere on the continent. There is therefore no need for us to get excited about their impending re-entry into Zimbabwe because their economic models and their thinking has not changed at all. In fact as far as some of us are concerned, the IMF is inadvertently saving President Robert Mugabe and his coterie of thieves.

The IMF, and now it seems the British, are brushing aside the bare facts that we are fighting against a value system which has at its core an uncaring, corrupt and brutal predatory leadership which has entrenched its economic and political interests at the expense of development. Ordinary Zimbabweans will not be better off simply because the government has access to IMF funds, in fact things could get worse.

In my opinion, regardless of how much money the IMF may throw at the problem or how much they may convince themselves that ZANU (PF) will change its behaviours, the fact of the matter remains that ZANU (PF) is an illegitimate government which is neither Â sincereÂ  nor has the solutions in transforming the lives of many Zimbabweans who have suffered under their irrational arrogance and political hegemony over the last 36 years. Why is that so difficult to understand for an organisation supposedly run by intelligent and educated people?

Sadly we continue to be masterminded by organisations such as the IMF including foreign governmental capital and yet we have all the capabilities ourselves to lift our country out of the mire. All we need is a new political leadership and those who wish to help Zimbabweans help themselves should really be assisting us to do just that.

If we do not do that, we shall remain recipients of their munificence in areas which they choose to assist us as they utilise their old methodologies and highly remunerated experts who have become permanent appendages of the African narrative.Â  Aid and loans to Africa is indeed a lucrative industry, not for Africaâ€™s poor, but for those experts who come in droves and claim to have the solutions.

I remain convinced by the argument that the West got rich through industrialising its economies and accessing large markets, even by force and yet they are not prescribing to us the very solutions which created the social and economic development which we see in their countries today. They are not promoting the economic theories and the democratic architecture which lifted their countries from poverty. That is the truth.

The responsibility of transforming Zimbabwe remains ours and ours alone but this can only happen when we create the necessary political environment and adhere to international democratic norms.

The fact of the matter is that Zimbabwe is not a fully democratic state but rather a dictatorship and de facto police state which is suffering under the grip of a predatory cabal which is seeking legitimacy from the IMF and other developmental institutions. This legitimacy is now being offered through the so called re-engagement process by the international community without the necessary fundamental paradigm shift by President Mugabe and his predatory coalition with regard to their responsibility to the well-being of us the citizens of Zimbabwe.

It is my contention therefore that Zimbabwe can never rise to its full potential as long as it does not build its own developmental capital base and be free from the discredited neo-classical theories and machinations of international governmental development capital through organisations such as the IMF.

If we are to write our own history, it is incumbent upon us to create a new paradigm which promotes economic freedom and offers value to foreign private capital and legitimately attracts free market capital without the need to continually depend on the IMF et al.

In Zimbabwe today, we owe the IMF billions and yet no one is asking what happened to those billions released by the IMF supposedly for our development. As a result, we now have a highly indebted country that shows no evidence of any significant development. In fact we are getting poorer by the day with no end in sight.

The ZANU (PF) solution to this, which is now allegedly being supported and promoted in several international circles, is to go and borrow more money in order to repay this debt with the hope of borrowing more money. That is clearly a ridiculous proposition which is most likely to see our country continue to be in debt simply because the root causes of our problem are being conveniently brushed aside.

Without fundamental political and economic reforms and the emergence of an inclusive democracy in Zimbabwe, no lasting economic solution s can be found no matter how much we borrow from the IMF.

IMF funding is but a temporary respite only to ZANU (PF) but will unfortunately mean nothing to millions of Zimbabweans who want a new political leadership which takes its responsibilities seriously.

Vince Musewe is an economist and author based in Harare. He is also the Secretary for Finance and Economic Affairs for PDP. You may contact him on [email protected]. He writes in his own personal capacity.