The United States has a single military base in Africa, positioned strategically along the sea route to Suez in the Republic of Djibouti. 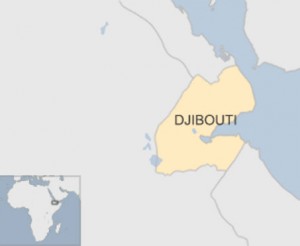 In Djibouti, France also has its largest number of troops on the continent, and China is building its own fortification, with similar plans afoot for both Russia and Japan. In time, tiny Djibouti could become home to the highest number of foreign soldiers per square kilometre of any country.

President IsmaÃ¯l Guelleh has made Djibouti an ally in the “war on terror.” From there, Washington flies its second-largest fleet of drones, both down the Somali coast against al-Shabaab and across the narrow strait to Yemen, Iraq and beyond.

Djibouti will hold an election on 8 April. President Guelleh’s People’s Rally for Democracy currently controls all 65 seats in parliament, an unhealthy monopoly.

Shortly before Christmas, his police opened fire on a peaceful demonstration in the capital, Djibouti City, killing several dozen people and wounding many others.

Mr. Guelleh has changed the constitution to give himself a fourth term in office at the next election, even though he pledged that his unconstitutional third term in 2011 would be the last. Since independence from France in 1977, the country has had only two rulers: Mr. Guelleh and his uncle.

Whatever index of misery you choose – Amnesty International, Human Rights Watch, Reporters Without Borders – Djibouti ranks among the most miserable countries on earth. The wealth of the ruling elite contrasts with a majority who lack access to water, food and sanitation.

Torture is common, and extra-judicial killing, exile or forced disappearance is the fate of anyone who stands up to the state.

Yet Djibouti is a member of the International Criminal Court.

We have heard repeatedly that the “war on terror” is being fought to make the world safe for democracy.

If Djibouti is so strategic to the major powers, surely stability is a key to maintaining its role as a partner. Long-term stability depends on respect for human rights. Freedom of the people is a right, guaranteed by many conventions of the United Nations.

Since the French Revolution of 1789, modern history has had no end of dictators who pushed their people too far, resulting in chaos and even more misery, and sometimes genocide.

We, the undersigned, are academics, professors and lecturers in the study of genocide and human rights.

We call on Washington, Beijing, Paris, members of the UN, the African Union and all peace-loving nations to monitor the 8 April elections, and to give the people of Djibouti a right to a government of their choice.