THREE million people may not get through the severe drought and famine that's bringing hunger, sickness and death to Zimbabwe's people according to the United Nations. 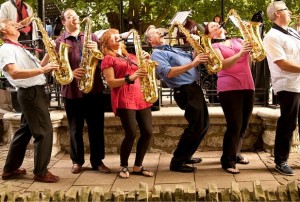 But a Bedford saxophone workshop wants to help them.

Sax’s Cool will be presenting a concert to help provide food for some thousands through the Zimbabwe Victims’ Support Fund.

David Winwood, from Sax’s Cool told Bedfordshire on Sunday: “90 per cent of Zimbabwe’s population is unemployed and most people have no money to buy maize meal for sadza, the staple food.

“Most families grow just enough around their homes to feed the children, but by February the harvest, which should be gathered now in April, had withered away.

“Rivers have dried up, reservoirs have been reduced to a puddle, wildlife and cattle are dying, fruit trees have shrivelled and people are sick.”

Touched by this plight, the members of Sax’s Cool have put together a concert to raise money to help combat this.

David added: “We hear little of the poverty and brutality in Zimbabwe because western reporters are not usually permitted to enter, but we hear from personal contacts that in the last 16 years between 3,000 and 4,000 commercial farms have been destroyed, and the agricultural industry with them.

“Houses have been bulldozed, companies have disintegrated, the economy collapsed, very few doctors or drugs are available and thousands have died, even though the wealthy are having a good life.”

So to raise both money and awareness of this issue more than a dozen saxophones, a couple of guitars, bass and drums, under the conductor Caroline Barlow, will bring a varied programme, including some popular pre-war favourites, to Priory Methodist Church, Newnham Avenue, at the end of April.

David said: “The hope is that, at Â£5 a ticket, a good number of folk will be able to come to the concert to give a bit of support to many suffering people, who may not otherwise survive.

“Please join us if you can.”

“Every penny raised will distributed directly to those in need across Matabeleland.”