AT least two people have been burned to death in Zambia during riots targeting Rwandan-owned shops over allegations that foreigners were behind a string of ritual killings, police said on Wednesday. 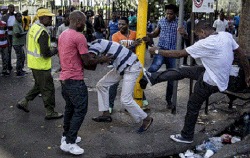 The violence erupted earlier this week in slum areas of the capital Lusaka after the recent murders of at least seven people, whose body parts such as ears, hearts and penises had been removed.

Hundreds of residents stoned houses and shops owned by foreign nationals, with some foreigners seeking refuge at police stations as looters took food, drinks, refrigerators and other electrical appliances.

“The official number of people who have died from the time the looting started is two. These are the ones who were burned to death on 18 April 2016 in Kanyama,” police spokesperson Charity Chanda said in a statement.

Police said 62 shops had been looted, but they were unable to confirm the nationality of Monday’s victims, who were burned with firewood and vehicle tyres.

Home Affairs Minister Davies Mwila has blamed the riots on false allegations that a suspected ritual killer of foreign nationality had been released from police custody.

He said that more than 200 people had been arrested.

“Elements in Lusaka with criminal intent took advantage of the pain and grief we all felt over the suspected ritual killings,” Mwila said in a television address on Monday evening.

Several thousand refugees from Rwanda, which was embroiled in genocide in 1994, live in Lusaka.

They run many of the shops in the affected parts of the city, and residents have accused them of using the body parts for witchcraft.

No rioting was reported overnight or on Wednesday morning, with police reinforcements on street patrol in trouble-hit areas.

In South Africa last year, mobs in Johannesburg and in Durban targeted migrants, ransacking their homes and burning shops.

At least seven people died and thousands were displaced, with citizens from Zimbabwe, Malawi and Mozambique among those affected.