OVER 30 Zanu PF politicians either suspended or expelled by the party have reportedly lodged appeals to return to the party with reports that President Robert Mugabe has consented to an appeals process that could see them rejoining the Zanu PF ranks. 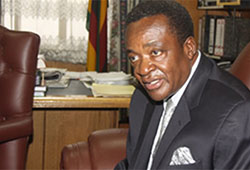 Webster Shamu is among those wanting sins to be forgiven

Several party bigwigs who include Joice Mujuru were summarily dislodged from the party last year for allegedly backing a plot by the then Vice President to oust President Mugabe.

The members, who include cabinet ministers and MPs, complained that they did not get the opportunity to be heard.

But the state media reported Monday that Zanu PF has formed a National Disciplinary Appeals Committee (NDAC) to handle complaints by expelled members.

â€œThe majority of the appeals that have been received want the National Disciplinary Appeals Committee of the Central Committee to forgive them for what they did,â€ he said.

â€œThey are saying despite the current punishment, they have remained loyal to the party and now want to enjoy the full benefits as members.

â€œOthers are complaining that the penalties imposed on them are too high compared to the crimes committed. So they want a review of that. Because of this, President Mugabe has set up a committee to look at these issues.â€

Revelations that up to 30 members are scrambling for a return to the beleaguered party buttress the narrative that â€œit is cold out thereâ€, an expression coined by party loyalists to say one could not survive outside Zanu PF.

Zanu PF, which controls national resources through its proximity to the state, has often been said to be the bridge between party members and their livelihoods through a patronage system run by the President and favouring party loyalists.

Die-hard Zanu PF members who have shown interest to return to the fold include former ministers Webster Shamu and Nicholas Goche.

The stampede for Zanu PF readmission also puts into jeopardy Mujuruâ€™s desire to draw support from her sympathisers within the beleaguered party. It could also be a Zanu PF attempt to stop disgruntled party members from flocking to Mujuru’s newly formed Zimbabwe People First. Former Zanu PF stalwarts and now ZimPF elders Didymus Mutasa and Rugare Gumbo have since withdrawn their appeals to be readmitted to the ruling party.