WASHINGTON DC â€” A United States Congressional staff member has attributed Britainâ€™s decision to renege on its Lancaster House commitment to compensate for land, on what he calls Zimbabweâ€™s corrupt and lop-sided land redistribution exercise. 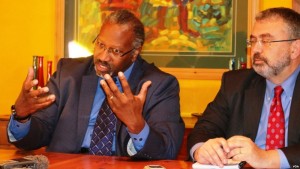 FILE: Gregory Simpkins (left) staff director for the US House Subcommittee on Africa, Health, Human Rights and International Relations and Counsel in the committee Piero Tozzi.

Almost three decades after Zimbabwe undertook a controversial land reform exercise that saw many white farmers forcibly removed from the farms they occupied, debate has been ranging over why President Robert Mugabeâ€™s government embarked on what has been described as a haphazard and chaotic exercise.

The debate was reignited at a recent town hall hosted by Voice of Americaâ€™s Zimbabwe Service, titled Zimbabwe @ 36: The way Forward.

Staff director Gregory B. Simpkins, of the U.S. House Subcommittee on Africa, Global Health and Human Rights, clashed with his Zimbabwean co-panelists Baptist minister and educator Rev. Isaac Mwase and businesswoman Sibongile Sidile Sibanda on the genesis of the reform and beneficiaries.

He further claimed that white commercial farmers were forced over the years to pay for the land by some suspected Zanu PF supporters as they knew that they got it through unconstitutional ways.

Britain provided millions of dollars under the so-called willing buyer willing seller land ownership scheme for the resettlement of thousands of people soon after independence, but reportedly ended the payments with the incoming administration of Tony Blair, who demanded accountability for the money disbursed.

Simpkins backed the claims that the British stopped funding the program following allegations that some state officials were allegedly pocketing the money.

The United States allegedly pledged to pay $75 million every year in the first 10 years of Zimbabweâ€™s independence but that was not done.

President Mugabe defied Britainâ€™s call for accountability saying Zimbabwe was not obligated to do so. It was soon after that the ruling Zanu PF party decided to forcibly take over white-owned commercial farms in 2000 claiming that Britain had reneged on paying for Zimbabwe’s land reform program.

But Simpkins said this land reform program did not benefit millions of Zimbabweans, including farm workers.

However, Reverend Isaac Mwase disputed this fact, stating that some families have benefited immensely from the land reform program.

He noted that the agrarian reforms were designed to address the lopsided land distribution pattern in Zimbabwe.

His views were echoed by Sibongile Sidile Sibanda, also a panelist. But she noted that the land is not being fully utilized by some new black farmers.

Obi Egbuna, a correspondent for the state-controlled Herald newspaper, argued that the land reform program was being impeded by sanctions. He asked Simpkins why the U.S recently imposed restrictive sanctions on some agrochemical industries.

In his response, Simpkins noted that the sanctions at times have an unintended negative impact.

America and its allies imposed targeted sanctions on President Mugabe over alleged human rights violations and election rigging. But Mr. Mugabe says the sanctions were imposed after Harare embarked on the land reform exercise.

The president has blamed the sanctions for the countryâ€™s current poor state of the economy.