PRESIDENT Robert Mugabe is in Kampala for the swearing-in ceremony of Ugandan leader Yoweri Museveni, 71. 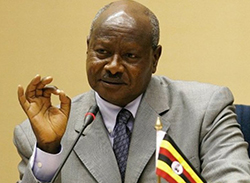 Museveni has been in power for over 30 years since he won a five-year guerilla rebellion against the results of the 1980 general elections.

Museveni was re-elected for another five-year term in February, winning 60 percent of the vote in a poll bitterly disputed by the opposition.

Meanwhile security was tightened in the capital, Kampala, and other major towns across the country after opposition parties vowed to disturb the swearing-in ceremony, claiming there was fraud in the February 18 elections.

The government has warned that police would not tolerate protests aimed at disrupting the ceremony.

A minister confirmed revealed that some of the opposition leaders had been put under house arrest, while others detained to avoid them from causing chaos during the ceremony.

The government has also banned the media from reporting protests by the opposition.

According to the Human Rights Watch, the February election was deeply flawed as local observers declared they were not free and fair.

International electoral observers had presented a mountain of evidence of how the process fell short of international standards.

Leading opposition party, Forum for Democratic Change (FDC) and its leader, Kizza Besigye had called for an international audit of the results.