Chatsworth is in Gutu district in Masvingo province. Before land reform it was important as a cattle loading siding run by the national railways. Surrounded by around 100 large-scale farms, mostly owned by whites, it was a centre for the ranching business. Cattle were loaded onto trucks and taken to the Cold Storage Commission in Masvingo, a government parastatal. 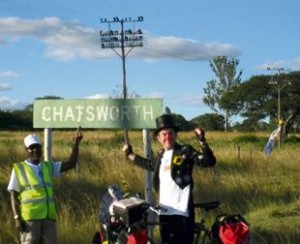 The Erasmus and Odendaal families were key ranchers in the area, owning many thousands of beef cattle between them on multiple farms. Today, with the exception of one large ranch, all the other farms have been resettled, with a mix of A1 and A2 schemes. This has transformed rural production and livelihoods, but it has also transformed Chatsworth.

Before Independence in 1980, Chatsworth was a small outpost with a scattering of shops, some railway employees and a whites-only primary school. There were few businesses, and racial differences were stark. FV recalls: â€™Greeks and Indians owned the shops in Chatsworth. I got employed at Tackeyâ€™s hardware on 7 January 1977. There was a colour bar. Shops had two entrances, one for blacks and another for whites. Even at the Post Office there were two entrancesâ€.

Chatsworth became more established after 1980. Government offices were established, and the school grew and allowed all races. Chatsworth now has 8 Ministry of Health employees at the clinic, 7 Ministry of Agriculture extension officers, 2 officers representing the Registrar General, 3 officers for the Ministry of Youth, 1 officer Womenâ€™s Affairs, 1 worker at Zimpost, and 2 Chatsworth Rural Council officers. But the growth of state presence from 1980 did not change much in terms of business opportunities. This only changed in 2000, with land reform.

Over the last 16 years, Chatsworth has grown very fast as a rural business and service centre. From a small settlement with 50 location and 50 railway stands, which were home to about 300 residents pre-land reform, residential stands have now increased to 300. Chatsworth is home to more than 1000 residents, and there are another 200 pegged stands await Council servicing.

In the past, the railway dominated the town. But today the National Railways employs just 2 workers in Chatsworth. The train still runs (erratically) and has become an important transport route for vegetable traders from the areas going to Masvingo to the â€˜kutrainâ€™ market by the railway tracks in town. According to ward councillor, Mr B, â€œTraders board the train to Masvingo town every Monday, Wednesday and Friday and sell tomatoes, vegetables, green mealies and grain bought at cheaper prices, from surrounding land reform farms. They have established relations with land reform farmers selling their labour, doing piece jobs [maricho] and sourcing agricultural produce for resale and consumptionâ€

Indeed, many of the new homes in Chatsworth have been built by these new agro-vendors, along with resettlement farmers and their children who are working elsewhere. Some rent out spare rooms at their residences to tenants who include civil servants. Some vendors have become part of a new business elite and invested in transport business, owning kombis and small trucks, while others rent shops. Civil servants â€“ the formally employed class â€“ do not have houses, as they do not have disposable income to buy stands, and must rent from the new landlords.

Chatsworth has also become a focus for religious activity in the region. Mrs C explained: â€œMany churches are active here. The international centre of the AFM is located here. AFM holds an annual prayer meeting attended by thousands of worshipers from all over the world. There are other numerous churches, Roman Catholic, Dutch Reformed, Zion and others. This creates a big demand for accommodation, but also other businessâ€.

Business activity has increased in Chatsworth since land reform. Today farmers on nearby resettled farms and their workers visit Chatsworth each day. In the past, Chatsworth had no supermarket, but today there is Mhakayaora supermarket, which employs two shop workers and a guard. Just before land reform, there were 4 grocery shops, employing one employee each. Today there are 12 grocery shops employing a total of 13 workers. Many grocery stores are also agrodealers.

Mr M commented: â€™I usually sell grocery in my shop but sell fertilisers and seed from August to October. Business is good. I started this business in 2010 after noticing that farmers spend time and money purchasing seed and fertilisers in Masvingo and Mupandawana. I am contracted to Pannar and Pioneer who deliver seed only to my shop. My main problem is transporting fertilisers which is not covered by the contract from Gutu-Mupandawana or Masvingoâ€. Currently there is no shop solely devoted to farm supplies, although the former white-owned shop that closed in the mid-2000s, is being renovated by a new owner.

In addition to larger grocery stores, there are smaller â€˜tuck shopsâ€™, selling take-away food. Pre-land reform there was only one near the filling station, but today there are 4 tuck shops at present employing 4 workers. Tuckshops gross USD 25 to USD 35 per day and pay licence fees amounting to USD 47 to Chatsworth Council every quarter. In the past there were 2 white owned butcheries, each employing 4 workers. White owned butcheries used to slaughter up to 4 cows per month. Today there are 4 butcheries, employing one worker each who does all the work. In the past there was one hardware store supplying nearby communal area farmers. White farmers travelled to Masvingo as they had transport and did not frequent the local shop. Today there are 2 hardware shops, which employ one worker each. The current hardware shops gross about USD 300 per day each selling building materials to residents developing their stands. Hardware shops also sell ploughs, harrows and cultivators. A worker at one of the stores commented:

â€œI sell business materials such as doors, door frames, window frames, and other building materials. My boss has a 3 tonne truck to carry hardware from Gutu-Mupandawana. The only constraint is USD 87 truck license per quarter which is high. Business is good. We are selling most building materials to increasing number of people constructing homes in Chatsworth. Resettled farmers are also our clients. It is expensive for people without own transport to buy building materials from Masvingo town and load it on the train or public transport. Expenses of buying from afar forces them to buy from us â€™.

In addition to the formal stores, there is now an open market selling vegetables. It is operated by four local women. Open market vendors gross only around USD 10 per day. The vegetable market faces steep competition from resettled farmers. â€˜We order cheaper vegetables from the resettlement farmers for resale but they follow us here and compete with us for customers selling door to door to Chatsworth residents and schoolsâ€™, complained PM.

Other businesses in Chatsworth include: 2 grinding mills, 2 carpentry shops, 4 welding shops, 1 tailoring shop and 1 hair salon. At one time illegal vendors selling fuel from jerry cans used to do thriving business, although this was brought to a halt by the opening of Petrol trade Service Station.

As a small town between Masvingo and Gutu-Mpandawanda, both much larger settlements, businesses in Chatsworth must compete. Ease of transport benefits many but not local businesses. In addition to the train to Masvingo that costs only a dollar, there are more than 15 Chatsworth based kombis making access to other towns very easy these days. Mr RT commented:

â€˜I started a transport business in 2010 when there were few vehicles on the road. I have a 20 seater kombi and charge USD 2 to Mpandawana. Nowadays competition is stiff, we are too many plying my Chatsworth â€“ Mpandawana route. Another big problem is police road blocks. Each and every day you should pay a ticket of USD 15â€“USD 20 for operating illegally. Even if you use short cuts to try and detour them some traffic police will be waiting to nail you. These days Gutu Council requires us to enter the Mupandawana Terminus to offload passengers paying USD 2 for each entry. The off â€“ tar roads I use are very poor but I have no option, because I am forced to pick and offload customers door to door or at farm gate to remain popular and sustain businessâ€™.

Since land reform Chatsworth has nearly doubled in size, with an expansion of all businesses. Not all have prospered, as competition with nearby towns is harsh, only increased with the massive expansion of transport access. Nevertheless there is a local economic dynamic linked to agricultural production nearby on the new resettlements. Such farmers and their workers, have boosted demand for basic groceries, hardware, agricultural inputs and of course beer. They also sell their produce locally, either directly to Chatsworth residents or via agro-dealers. It is the agro-vendors, mostly women without land but living in Chatsworth, who have really amplified the economic effect. Making use of the good transport connection to Masvingo they have made significant profits, and are the new landlords in the town, and are investing intensively in new building projects. The Chatsworth boom prompted the transfer of status to â€˜growth pointâ€™, a move that did not go down well with everyone, as it resulted in hikes of rates, stand and service costs by the council. As the council seeks to gain revenues, undermining the tight margins of local businesses will be a challenge, especially as access to Masvingo and Mupandawanda increases.

Chatsworth today Chatsworth is a long, long way from the white-owned farm town of 50 years ago, but it faces many challenges similar to other small towns that have emerged post land reform, and for which no strategic growth and development policy exists.

This post was written by Ian Scoones and appeared on Zimbabweland. Research was also carried out by BZ Mavedzenge and Felix Murimbarimba