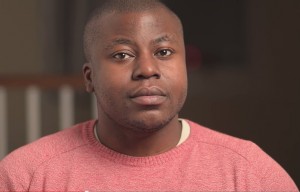 My father could talk for hours about these lands, his familyâ€™s tribal home, and it was these stories, rather than tales of boy wizards, fantastic foxes and made-up worlds, that I craved as a child. The far away land that captivated me was not a fantasy. My fatherâ€™s Africa was real. It was filled with complicated people, with hope as well as despair, with abject failures and memorable triumphs.
This Africa was certainly more real than the caricature we encountered in films and books, where the â€œgood guysâ€, who always seemed to be liberal-leaning white people, came to the rescue against the â€œbad guysâ€, inevitably corrupt, murderous, black tyrants. Weâ€™ve all seen these films. And weâ€™ve all read the articles describing endless cycles of war and famine. Weâ€™ve watched the television news bulletins with their perpetual cache of familiar images: mud huts, naked children with flies crawling all over their skin, so malnourished that their bones are visible and their ribs are sticking out.
My fatherâ€™s stories were very different.
As one of the physicians to President Kenneth Kaunda, the first President of Zambia, my father enjoyed a front row view of the political path that the people of African nations carved out for themselves in the second half of the twentieth century.
The first story I ever recall my father telling me was of the day Kaunda gave him his first job. Kaunda was tribally â€˜Bembaâ€™ and from the Northern Province, yet he rose to power as a Zambian for all Zambians – and looking into my fatherâ€™s eyes that day, he spoke to him fluently and passionately in the Lozi tongue, my fatherâ€™s tribal language from the Western Province. Kaundaâ€™s ability, and his political intelligence, to communicate with my father in his own language transformed the words â€œOne Zambia, One Nationâ€ into more than a mere political slogan. President Kaundaâ€™s â€œOne Nationâ€ thinking inspired a foreign policy encouraging other independent African nations to help free Zimbabwe and South Africa from apartheid rule.
It was this, the fierce ambition and utterly charismatic vision of people like Kaunda to correct colonial injustice throughout all African nations, that inspired me to write After Independence. I wanted not to revive the familiar stories of the fight for independence itself. Instead, I wanted to explore what this independence, so ardently, even worshipfully, invoked for so long, might actually mean for everyday people, white and black, once implemented.
It seems to me that there are two ways to write about Zimbabwe in the decades after independence was achieved. One way is to stick to the received orthodoxy of mainstream western media, focusing through a top-down approach on the consequences of one (often corrupt) black leaderâ€™s actions. What excited me was the other way of telling this story, one that acknowledgesÂ  a chaotic and conflicted moment in history, and people who do not fall easily into categories of â€˜goodâ€™ or â€˜evilâ€™.
The world of After Independence is a place where the different views of war-hardened veterans, pacifist civil servants and white farmers symbolises the debate that all postcolonial countries must address: how do we balance punishing past injustice while being just to individuals living today?
Through the characters of my play I hope that I interrogate â€˜independenceâ€™ and its many meanings in Zimbabwe. For a nation; for an old white farmer; for a disempowered woman; most of all, for a young white woman and a young black man looking to the future â€“Â  â€˜independenceâ€™ means different things. It is this difference, and its difficult and often fatal consequences, that we explore in After Independence.