On the 26th of May 2016, Heal Zimbabwe Trust in collaboration with Edzai Isu Theatre Arts Project focusing on the National Healing and Reconciliation process, organized a play at Zimbabwe Hall in Highfields, Harare. 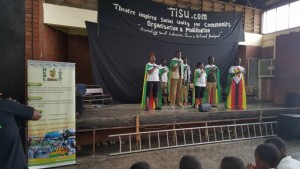 A scene from the NPRC play

The play brought different theatrical actors to highlight the historical progression of episodes of human rights violations in Zimbabwe that need to be addressed through varying national healing and reconciliation processes. Some of the issues that were showcased include violations that were perpetrated during the pre-colonial period, Gukurahundi, land reform, Murambatsvina and the 2002, 2005 and 2008 electoral violence.