ZIMBABWE will soon see the introduction of bonded notes to the tune of $200 million as government finds itself in panic mode in the wake of a worsening cash crisis which has seen banks limiting cash withdrawals by depositors. 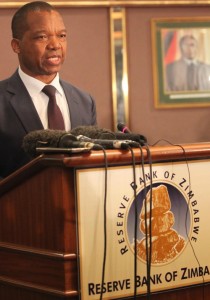 Addressing the media in Harare Wednesday, Reserve Bank of Zimbabwe (RBZ) governor John Mangudya announced a raft of measures which he said shall help ease the strain.

Top among them is the introduction of bond notes which he said shall help boost liquidity in a country which abandoned its own currency in 2009 for the current multi-currency system.

Among the measures, he said, was the introduction of a new family of bonded currency, which shall include localised notes to operate with the same value as the US dollar.

â€œThe Zimbabwe Bond Notes of denominations of $2, $5, $10 and $20 shall, therefore be introduced in future, as extension of the current family of bond coins for ease portability in view of size of the USD200 million backed facility,â€ Mangudya said.

â€œThe facility shall also be used to discount trade related paper in order to provide liquidity for business trading operations.â€

Zimbabwe already has a family of bond coins which were introduced by government in December 2014 to provide loose change to Zimbabweans who were rounding off prices to the next dollar.

Zimbabweans are sceptical of their government and have often resisted attempts to reintroduce the Zimbabwe dollar which they blame for the loss of their savings during the hyper inflationary period before 2009.

Currently, the government is at pains to pay its bloated workforce but has no money to use.