Small towns near resettlement areas are booming. New business opportunities generated by a change in rural production systems has transformed opportunities. In the past these were very sleepy service centres for the surrounding large-scale commercial farms. Somewhere where farm workers would come on days off to drink, or where people living on the farms would buy basic provisions. 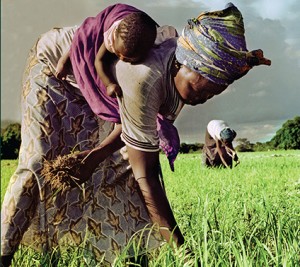 But with wages low and food and other rations sometimes offered by farm owners, business was limited. Most such towns had a few general supplier and a bar at most. There were also usually a few farm suppliers, providing inputs such as seed and fertiliser; in some cases a formal marketing outlet run by a company or parastatal; and a few repair shops for farm vehicles. Transport connections were limited, as farm workers were largely resident on farms, and the owners had their own vehicles. In sum, they were rather depressing places.

But today they have changed. There are many more shops, bars, butcheries, and service providers of various sorts from tailors to hairdressers. Outlets from major chains are opening operations, and there is a general buzz of activity, especially at harvest season when people are selling produce. Transport connections have multiplied too, with buses and Kombis departing regularly to larger urban centres, as well as traversing the rural areas.

There have been many attempts over the years to encourage such growth. Rural and urban planners often designated such places as â€˜growth pointsâ€™ in the 1980s. But this was more an aspiration than a reality, and many failed to grow at all, surrounded as they were by rural areas that were the inheritance of the colonial â€˜reservesâ€™. The reorganisation of district administrations created Rural District Councils too, and these were supposed to link the large-scale farming areas, with the communal areas, and encourage economic activity, particularly in small towns. Again this failed as the two economies never integrated, with communal areas being largely domains of poverty, and the large-scale farming areas exporting profits in vertical value chains without local spin-off benefits.

So it was only with land reform that a major reconfiguration of the rural economy occurred. With new farmers on new land in need of output and input markets, as well as cash to spend on services and other consumption goods. The linkage and multiplier effects have been tangible. This did not emerge from municipal town planning, but from a reconfiguration of the whole rural economy. With value chains now more locally rooted, and linked to local businesses there was more money flowing in the economy, and profits to be made.

This has attracted external investors. From large supermarkets to small-scale entrepreneurs, people have been setting up businesses in such towns, as well as in the more conventional and larger towns nearby. Many beneficiaries of land reform have profited too. They have started stores, repair shops, transport businesses, and more. They have also started investing in real estate. The new landlords in these towns are the farmers with profits from farming to invest, and this has seen a growth in building on plots made available as part of long planned town growth by the municipal authorities.

This process was in many ways not expected, and took a time to emerge. When we started our work after the land reform in 2000, the economy was not in a good shape, and it only got worse in the following years. As hyperinflation struck, any business involve the exchange of cash was out, and there was simply no business finance available. So it was only after 2009, when the economy was stabilised, and the US dollar became the currency of choice, that business started. It took a while, but today, things are moving.

And this despite the wider economic woes of the country as a whole. Yes, there is still limited bank finance, and loans for anything are hard to come by. Yes, business is small-scale, mostly based on a limited array of goods and services. And yes some investment is perhaps only speculative, and not that productive, like building houses (although most are rented, so there is a demand). But all of this is happening without a sense of a plan. This is the market economy at work, generating a surprising economic momentum that over 46 years since Independence has failed to happen through plans and formal investment. But in order to make the most of it, more has to happen: plans are useful, when things are happening, and investment in roads, sanitation, electricity, health care, education and so is vital. Just as is financing for everything from the smallest market stall to a major business operation. But municipal authorities sitting on a tax base for the first time ever must not be greedy, and take advantage. Building sustained growth requires care, and corrupt political manoeuvres or over-zealous regulation can stifle everything. But the small towns of Zimbabwe, as the small towns of Africa more generally, are definitely places to watch.

In the coming weeks, I will explore these dynamics, and pose some questions for planning and policy. As the countryside has reconfigured following land reform, so have the towns that link to the new areas of rural production. But there has been vanishingly little thinking post land reform on the new dynamics of rural-urban economies, and the connections being forged. This short blog series is a first attempt to provoke some thinking in this area, based on our research.

In the 1980s there was much work, largely through the Department of Rural and Urban Planning at the University of Zimbabwe, which highlighted the importance of small towns and urban development, including some importantÂ Occasional Papers and an influential book. Researchers then asked what the changes of policy priorities that Independence brought would imply for urban development in rural areas. New thinking is urgently needed today that asks what land reform implies around the same issues.

In the forthcoming blogs I will profile two small towns in the heart of new resettlement areas â€“ Chatsworth and Mvurwi â€“ from our study areas in Masvingo and Mazowe areas. They are very different in origins and character, but illustrative of the dynamics. The final blog will return to some of the bigger policy issues, and ask what needs to be done.T