ALMOST all major companies in Gweru are either closed or a shadow of their former selves thanks to operational challenges brought by the dire economic situation, Zimbabwe Congress of Trade Union (ZCTU) central region chairperson, Martin Tazvivinga, has said. 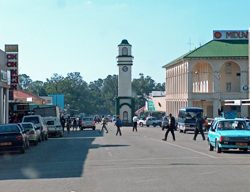 Addressing workers at the May Day commemorations at Mkoba stadium, Tazvivinga said companies that used to be held in high esteem such as ZimAlloys were now a pale shadow of themselves as grass and unkempt plants have grown inside their premises.

He said the small crowd at the Workers’ Day celebrations was a result of company closures which have rendered many Gweru residents jobless.

â€œIf you pass through ZimAlloys, instead of finding ferrochrome being produced you come across a lot of grass and plants that have outgrown the premises,â€ Tazvivinga said.

â€œThe small crowd that you see today (Monday) at this stadium is just a reflection of how industries have collapsed not only here in Gweru but the country as a whole.â€

According to the report presented by ZCTU central region last year, ZimAlloys was operating at 8% capacity with only 280 workers left to run the firm.

Companies such as Bata Shoe Company had scaled down its workforce from a peak of 5 000 to 1 000 employees due to economic hardships.

The report also indicated that companies like Zimasco, Dairibord and Anchor Yeast had already announced plans to downsize in order to remain afloat.