For 36 years, Zimbabwe has been synonymous with its veteran leader, Robert Mugabe. 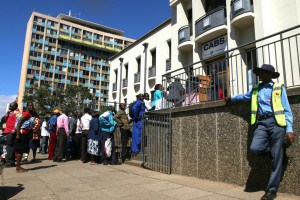 Zimbabweans queue to withdraw cash from a bank in Harare, May 5. The country is currently experiencing a cash crisis that is bringing back haunting memories of the hyperinflation of 2008-09, when bread cost 10 million Zimbabwean dollars. JEKESAI NJIKIZANA/AFP/Getty Images

The 92-year-old leaderâ€”Africaâ€™s oldest serving presidentâ€”has dominated the political and media conversation in the Southern African country. In recent months, Zimbabwean media has been saturated with debate about who will eventually succeed Mugabe, who says he wants to rule until heâ€™s 100.

But since April, an activist movement born on social media has punctured the Mugabe-focused discourse and generated fervent discussion about the embattled countryâ€™s future. The hashtag #ThisFlag went viral on Twitter after a Baptist pastor based in the capital Harare shared a video, in which he lamented how he had been â€œseparated from the promise of my flagâ€ by a government accused of rampant corruption and suppressing political opposition.

Pastor Evan Mawarire posted the video on April 19, the day after Zimbabwe celebrated its independenceâ€”which was achieved in 1980 and since when Mugabe has ruled the country. Mawarire says he made the video in desperate frustration after realizing he was unable to generate the funds to pay for his children to attend school, a deficit he attributes to the countryâ€™s failing socio-economic system. Zimbabweâ€™s GDP growth has dropped under 2 percent, its economy is half the size it was 15 years ago and a cash crisis has seen food prices soar, bringing back dreaded memories of the hyperinflationary era of 2008-09, when annual inflation reached 231 million percent and the price of bread rose to 10 million Zimbabwean dollars.

For Mawarire, Zimbabweâ€™s decline means that total change in the political system is necessaryâ€”including the president. â€œWe have had a same government with the same system and the same ideas for 36 years,â€ says Mawarire, 39, who runs His Generation Church in Harare with a congregation of around 70 people. â€œAs a young Zimbabwean, my desire is to see wholesale changeâ€”we just want something new and we know we canâ€™t do it with the same people.â€

Speaking out against the regime is a dangerous business in Zimbabwe. More than 100 people died and hundreds more were abducted as Zimbabwean security forces brutally cracked down on political opposition ahead of the 2008 electionâ€”which Mugabe eventually won in a second round vote after opposition leader Morgan Tsvangirai defeated the president in the first poll. In March 2015, a vocal critic of the Mugabe regime, Itai Dzamara, was snatched from a local barbershop and bundled into an unmarked car. He has not been heard from since, with his family and supporters accusing the military of being behind his abduction. The military has denied these claims but the usually efficient Zimbabwean intelligence services have failed to produce a single lead in the case, despite Dzamara being missing for 15 months.

â€œI would be lying to you if I said Iâ€™m not concerned [about my safety],â€ says Mawarire. â€œBut at this point I donâ€™t know what else to do. I canâ€™t keep quiet any longer and this is what Iâ€™ve been urging the citizensâ€”let us not remain silent.â€

According to Mawarire, the Zimbabwean flag makes a promise to its peopleâ€”and Mugabeâ€™s government has failed to deliver on its promises. Ahead of the 2013 election, the ruling Zanu-PF party pledged to create 2 million extra jobs for the country, where almost three-quarters of the population lives in poverty, according to the World Bank. While Zimbabweâ€™s true unemployment rate is a mystery, it has been estimated as high as 80 or 90 percent (the state-run Zimbabwe National Statistics Agency put unemployment at 10.7 percent in 2011). The government is also forging ahead with an indigenization programâ€”which requires foreign firms to transfer at least 51 percent of their shares to black Zimbabweansâ€”that political opponents say will drive foreign investors out of the country.

The current cash crisis is the latest manifestation of Zimbabweâ€™s political and economic malaise. Mawarire says he has heard of elderly people queuing at banks for three or four days just to withdraw $30 from their pension. Zimbabweans fear that a repeat of 2008â€”when hyperinflation wiped out the value of pensions and savings and left at least eight in 10 people out of workâ€”could be just around the corner, he says. â€œThe fear is that we are about to lose everything that we worked so hard to rebuild since 2008. We have been through this before. We just donâ€™t trust the system anymore.â€

Unsurprisingly, the Zimbabwean political hierarchy has not taken kindly to Mawarireâ€™s campaign. Government ministers launched the hashtag #OurFlag in a bid to reclaim the social media space, but the trend gained little traction in comparison. Zimbabwean higher education minister Jonathan Moyoâ€”himself very active on Twitterâ€”described the movement as a â€œpastorâ€™s fartâ€ and accused Mawarire of being funded by the U.S., labelling Mawarire as a â€œpastor for hire.â€ Mawarire also says he has received death threatsâ€”including an anonymous phone call where the caller threatened to strangle him with the flagâ€”and was physically confronted by ICT minister Supa Mandiwanzira following a radio interview. Mawarire says the minister waited for him in the radio stationâ€™s car park and alleged he was trying to destabilize the government, threatening to â€œdealâ€ with the pastor.

Mawarire says he is disappointed with the governmentâ€™s response, which he calls â€œan insult to the citizenry.â€ â€œWhen people stand up to speak or contribute towards nation building in divergent ways to the government, they accuse us of being funded and founded by the West, as if we canâ€™t think for ourselves,â€ says Mawarire.

The governmentâ€™s accusations have brought Mawarireâ€™s motives for the #ThisFlag movement under scrutiny. He insists that he is not affiliated to a particular political party and is not advocating a revolution or violent overthrow of the current administration. Mawarire says Zimbabweâ€™s next general electionâ€”scheduled for 2018â€”provides the horizon for his movement and constitutes â€œa shot that we have as Zimbabweans to exercise our right to put in place a government that we want and can hold accountable.â€

Until then, the citizen-led movement will continue its activism. Mawarire says they are planning to hold a debate with the governor of Zimbabweâ€™s central bank about the recent introduction of bond notes, a cash substitute that some people fear could be a precursor to the resurrection of the Zimbabwean dollar. The movement is also petitioning for the removal of Zimbabweâ€™s energy minister Samuel Undenge, who is caught up in a corruption scandal following the revelation that government power-generation projects were inflated by more than $500 million.

Amid the security threats and vitriol directed his way on social media, Mawarire admits things might be easier if he abandoned his home country and relocated. But he says the prospect of abandoning his stake in Zimbabweâ€™s future is something he is not willing to contemplate right now. â€œEven if I do leave, the question is then what? I am still going to have to face my children when they grow up, and they are going to ask me: â€˜Dad, what did you do when Zimbabwe was burning?â€™â€