Owing to the overwhelming response from the community and the rapid growth of the yearly Buntibe Cultural event, innovative Chibuyunuzyo Arts Association Director, Brian Kembo, the brainchild behind the fast growing Gokwe annual Buntibe Cultural event, has promised to take the province by storm and to turn future events into fully blown national arts and culture festivals. 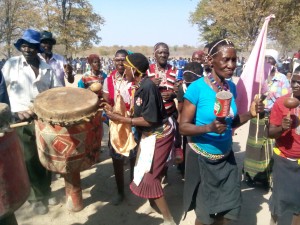 One of the members of the organising, Tawanda Siampongo explained to this reporter that the word ‘Buntibe’ is derived from a popular Tonga dance and that is well known for instilling unity of purpose in communities.

The event, that has gone from strength to strength, started out as a ward based project and has now grown into a district event. This year the festival will be held on the 20th and 21st of June under the Culture Week theme Towards increased community participation.

ItÂ  is envisaged that this Midlands based event will take over from the seemingly defunct Midlands Arts Festival (MACfest) as it enters its third year. This cultural event has grown and improved over the years and organisers have revealed that the events they have planned will both impress and astound revellers.

Kembo told this reporter that they expect the forthcoming event to be graced by the likes of Provincial State Minister, Jason Machaya, the US Ambassadorâ€™s small self-help projects financier, Africa Community Publishing Representative, PHOEBE and the UK based Tools with a Mission (TWAM) co-ordinator, Mollin Delve as well as senior officials from the National Arts Council and the Ministry of Rural Development, Preservation and Promotion of National Culture and Heritage.

The Dorset Performing Arts Director, Siphosami Ndlovu has promised to provide fireworks for the event and will use the platform provided to advocate for appreciation and respectby every person in the country for practitioners of arts and culture as most consumers presently violate artists’ economic rights.

â€œThis is the right time and right platform for us as artists to collectively express our grave concerns at the continued violation of our rights by politicians, NGOâ€™s and other arts consumers.Â  It is a known fact that they dump artists in poverty â€“ this has been likened toÂ  smelly used condoms, hence our newly commissioned art production entitled ‘Munoyiitireiko iyoyo?’ and â€˜Used Condoms’,â€™â€™ he said.

â€œThis is an event worth attending. When artist speak with such steadfastness and confidence about being treated as professionals of the arts and culture industry, it indicate a very bright future for the arts industry,â€ added Ndovu