President Mugabe has destroyed the country and intends to do so up to his grave. The 91 years President does not care about anyone else except his so called wife Grace Mugabe this is shown by matters arising daily, people try to change certain situations for the better but fail at it and some die in the process. Zimbabwean issues come one after the other. 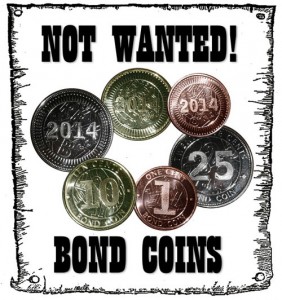 It is with sadness and full of disgrace that Zimbabwe is now run like a Chinese restaurant using bond coins this clearly shown that Zimbabwe is no longer not capable of sustaining a trade contract. USA and other countries have decided to take back their currency, leaving Zimbabwe broke without its own currency. Gone are the happy days when a Zimbabwean dollar was equivalent to a British pound and it could buy a loaf of bread. Zimbabwe has gone to the dogs how a county decided to create and bring in its own currency of bond coins just when you think that things are about to get better thatâ€™s when the worse is only beginning.

This has not only brought the country into bankrupt but also has left Zimbabweans poorer and unable to sustain or keep their family fed. Being Â Â a Â Â part Â Â of Â Â the Â Â most Â Â hated Â Â congress Â Â party Â Â is Â Â also Â Â a Â Â really Â Â big Â Â issue Â Â it Â Â is considered a blessing and a curse, a blessing when you get the opportunity to fight for whatâ€™s right and a curse in how you are ill-treated or even killed for wanting toÂ  stand up for justice in your own country of birth. Spokesman Bishop Ancelimo Magaya said that following the illegitimate 2013 elections Zanu PF wanted to reintroduce the Zimbabwe dollar to fund their 2018 election campaign. â€˜The decision to print bond notes will not help anyone but the political leaders. There is no positive to bond notes and we are certain they are externalising their money. They are making massive withdrawals to relocate their wealth outside the country and we call upon all Zimbabweans to put this to stop by refusing the use of bond coins.

ENOUGH IS ENOUGH we demand the obnoxious Mugabe and the dubbed loose morals Grace to stand down. We have no confidence in the so called elections as Mugabe will again rig the elections and Zanu Pf Militia will intimidate, beat, torture, rape and kill the opposition. Mugabeâ€™s tactics are well known because he is a like poker player who plays with his cards open. We demand free and fair elections that are internationally monitored and we demand a new voterâ€™s role that includes the Diaspora as well. If we cannot get this, Iâ€™m afraid it will be a peoples revolution, we have reached a point of no return, ENOUGH IS ENOUGH!!!. We will all congregate at the Africa Unit square and take on from when Itayi Dzamara left. Mugabe might have killed Itayi Dzamara but no his spirit, we will carry on with his spirit.

As I write this, Zanu PF has started the scare tactics already villagers are intimidated through Chiefs and the opposition is denied rallies. What we have witnessed in the so called 1 million march were school resources being abused by Zanu PF to, give us the impression that Mugabe has the support, Iâ€™m afraid, that will only fool the solus stutus.