I was listening to the president's spee ch at the heroes' acre and it is worrying to see how the bible is used by politicians to further their evil political agenda. He cited the First Letter of Paul to the Corinthians though without being specific because there is no verse or chapter. 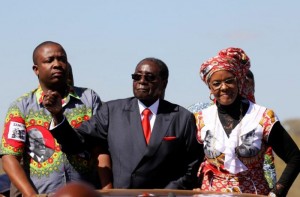 So one is not really sure of the Love he is referring to? But he says, “love one another ….not destroying one another” I guess the closest Chapter for his discourse is 1 Cor: 13 which is within the context of spiritual gifts. I would like to draw the president’s attention to 1 Cor: 13: 4, “Love is patient and kind; love does not envy or boast; it is not arrogant or rude. It does not insist on its own way; it is not irritable or resentful, it does not rejoice at wrongdoing, BUT REJOICES WITH TRUTH…”.

Given this verse I would argue that Evan Mawarire is a real Man of the Cloth. He even deserves the title, “true prophet”. The God i know from the bible is a God of truth. Mr president your government is doing the very things that are the antithesis of Love according to Paul. Your leadership is characterized by arrogance and rudeness. If you are not listening to the grievances of the people ‘who voted you’ then who are you serving? We are challenging the wrongdoing in your administration and the response to that is threats.

Is that not rejoicing in wrongdoing? Stop treating Zimbabwe as your private property. What love can you preach when you are competing to build 50 bed roomed mansions at the expense of people’s welfare? What love can you preach when you can not pay people their wages on time? What we are simply asking as citizens is accountability in your government. We are tired of your ‘next door rhetoric’-all problems are coming from outside.

Mr president the solution is not sending to exile voices of reason but exile our problems.