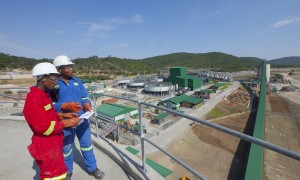 More than 40 partners, including major Russian and international manufacturers, financial and development institutions, and think tanks, contributed to event preparation. The main international industrial trade fair INNOPROM-2016 was held on July 11-14. The Ministry of Industry and Trade of the Russian Federation is the main exhibition organizer. The 2016 marked the seventh INNOPROM.

This forum, supported by the Ministry of Trade and Industry of the Russian Federation, provided an opportunity for Russian companies to meet and discuss possible cooperation with representatives of African manufacturing organizations and state bodies as well as representatives of the banking and investment sectors.

In 2016, the Russia-African Forum took place on June 16, during St. Petersburg International Economic Forum and in July in Yekaterinburg in the Urals. It is planned to hold the next Russia-African forum in February 2017 in one of the West African countries.

The “Russia â€“ African Forum” has become an integral part of the program of the exhibition and it is no coincidence, that the African vector every year becomes more and more significant in the foreign policy of Russia, – said Russian Minister of Industry and Trade, Denis Manturov while addressing the gathering.

According to him, the Russian business is currently looking for new growth points and, in this respect, Africa is one of the most promising continent which ranks second in the world after North America in terms of investment attractiveness.

Russia is implementing a number of large-scale projects with participation of Russian capital in Africa. Among them is a complex development of deposits of platinum in Darwendale in Zimbabwe, the development of the world’s largest bauxite deposit in Guinea and an aluminium plant in Nigeria.

Of particular importance, Denis Manturov also pointed to the creation a Russian industrial zone in Egypt. It is expected that products of Russian companies will localize their production and will be in demand not only in the local market, but also in all regions of North and East Africa, the Middle East and Eastern Europe.

He expressed assertively Russia’s readiness to expand its activities in projects of nuclear energy and, oil and gas industry. “We hope that the authorities of the countries of the African continent will contribute their part in creating most favorable conditions for the development of all joint projects that we have been discussing and also here at INNOPROM” – said Denis Manturov.

According to the Minister of Industry and Trade, the forum provided a good opportunity to meet and to agree on ways of cooperation with representatives of companies, government agencies, banking and investment community.

Manturov expressed the hope that, in the course of discussions, new ideas would be realized in the near future and help strengthen the basis for Russia-African cooperation in the long term, and exhibitors to find business partners and take away not only useful contacts but also practical arrangements.

Generally, the key speakers and participants, noting the existing huge untapped potentials in their relations, outlined diversified ways and reviewed prospects for strengthening and developing further both economic and business cooperation between Russia and Africa. The participants also discussed ways to showcase effectively the investment and export potential to African region.

It was also a significant platform for African business community to explore Russian industrial potential as well as to further strengthen the economic and trade relations with Russian companies and government authorities.

The general or popular sentiments at the forum was that Russia and Africa need a more efficient system of exchanging vital information and effective efforts have to target, first and foremost, the search for new partnerships, new ways directed at boosting the economic cooperation and at implementing the biggest and most promising projects.

It has often been said that Russia and African countries have had a long history of business relations, including infrastructure development, human resource training and healthcare projects, as well as a wide range of other areas.

Currently, the turnover of trade between Russia and Africa is estimated at $2.5 billion, while imports of non-primary goods to the African continent already aggregate to $430 billion and are growing at 10-15 % a year. Nearly, in all economic sectors in Africa, Russia’s major competitors are from foreign countries especially Asia, western Europe and European Union.

During the forum there was a presentation of the B2B export online platform for export sales, as well as visits by African delegates to a variety of major industrial organizations located in the Urals Federal District.

The region has a highly developed, diversified and structurally complex heavy industry including ferrous and non-ferrous metallurgy, heavy machine building, the chemical industry, the extraction of mineral raw materials, lumbering and woodworking. The Urals region encompasses the central Urals, northern and southern Urals, and adjacent areas of the eastern European and western Siberian plains.