Every now and then a book comes along that breaks through the wallpaper of my own life and delivers its message intravenously. Elephant Dawn by Sharon Pincott did that for me â€“ an intense read, inspiring and moving. 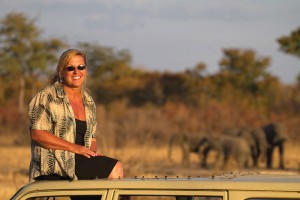 Sharon Pincott made the life-changing decision in 2001 to forgo her jet-setting job and comfortable Australian home to make a difference in the world. Having sold her possessions, and later her home, in order to fund this project, she arrived in Zimbabwe during a tumultuous time in this countryâ€™s history â€“ to spend time with a herd of elephants that in 1990 was granted protection under President Mugabeâ€™s decree.

These wild elephants roam over a large unfenced area that includes the magnificent Hwange National Park and the adjacent Hwange Estate. The presidential protection turned out to be a paper tiger, and to this day the elephants face the same threats that elephants face all over Africa â€“ primarily poachers and trophy hunters â€“ exacerbated and fuelled by Mugabeâ€™s controversial and destructive land reform programme.

This book chronicles Pincottâ€™s roller-coaster journey, and follows the lives of several of the matriarchs that she got to know. 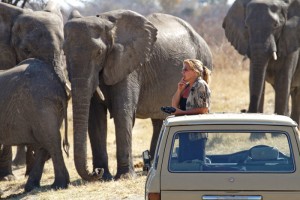 Sharon with some of the elephants Â©NHU Africa

Over an incredible 13 years this tough-as-teak lady developed a valuable understanding of all 17 extended family groups that make up the greater 500-strong herd. She also became the public figurehead of this herd in their battle against the deadly intentions of the poachers and trophy hunters. Her deeply personal bond with some of the matriarchs (who would come running when she called) really struck a chord with me, although the touching and caressing of some of the elephants would surely have attracted criticism from the usual coterie of arm-chair experts and haters.

And yet, here we are â€“ Zimbabweâ€™s Presidential Herd of elephants is now famous and under intense international scrutiny. Job done. Well, partly. Will Zimbabwe take advantage of this marketing godsend and capitalise on high levels of tourism interest? Time will tell.

Sharon Pincott is, at time of writing, currently back in Australia taking a break from the pressures of the intensely political world of wildlife conservation. Hopefully her energy and passion are not lost to Africa, and she will soon be back. Again, time will tell.