Ever since 2001, a year after the brutal invasion of Zimbabweâ€™s commercial farms began, the country has been dependent on vast volumes of international food aid. Thanks to the generosity of farmers and tax payers in the USA, the UK and elsewhere, mass-scale starvation has largely been averted, but the cost and complex logistics have posed a massive, 15-year long challenge. 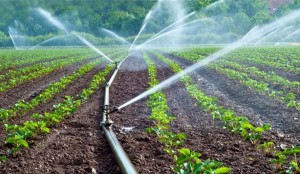 In 2002, for example, just two years into the land invasions, Zimbabwe recorded a 70 percent shortfall in production to meet annual food requirements.Â  Consequently, the country required 486,000 tonnes of food aid to meet the food security requirements of 49 percent of the population (more than 6.7 million people) over the period September 2002 to March 2003.

This year, due to the ongoing chaos and chronic lack of farming activity on the majority of the commercial farms, a third of the population (more than 4 million people) requires international food aid.

Once again, President Mugabe and his government have blamed the countryâ€™s dismal agricultural performance on the drought, but the reality is that last year, the majority of irrigation dams on the former commercial farms had not been utilised and were full.

On the back of property rights, Zimbabweâ€™s commercial farmers developed 80 percent of the continentâ€™s irrigation dams, with a total of 10,747 dams and reservoirs covering an area of 3,910Â kmÂ².Â  This enabled agriculture to become the most important economic sector, despite the country being prone to intermittent drought conditions.

A hungry nation can be controlled

The fact that we have become a consistently hungry nation has played into the hands of the same political elite who have cunningly created the hunger:Â  they have insisted on distributing food aid.Â  By so doing, the Mugabe government has been able to manipulate the peopleâ€™s loyalty â€“ notably in the vulnerable rural areas – and has thus successfully and forcibly controlled them.

Not only has food aid been withheld from opposition strongholds, but actual blockading of food distribution has frequently taken place.Â  In January 2002, for example, the British charity, Save the Children Fund, was barred from delivering food to about 10,000 starving people in the remote northern district of Binga.

Although widespread hunger is a convenient tool of control, it is also an embarrassment because it counters government propaganda claiming that the â€œfast track land reform programmeâ€ has been a success. If this were indeed the case, how could a country that used to feed the region fail so spectacularly year after year to feed itself?

Various desperate measures have been dreamed up by the government to, on the one hand, rectify the embarrassment; Â but on the other hand, to keep ruthless control. Â Â In 2005, â€œOperation Maguta/Inalaâ€- which means â€œpeople have their fillâ€ – was devised to utilise the army to till the land and feed the nation through a â€œcommand agricultureâ€ system.Â  It failed dismally, resulting in 5.8 million people requiring emergency food assistance.

Then there was Reserve Bank governor Gideon Gonoâ€™s corrupt â€œfarm mechanisation schemeâ€ through which more than US$200 million was pumped into the four-phase farm mechanisation programme.Â  It was launched in 2007, ostensibly to help the countryâ€™s newly-resettled farmers with farm implements on a rent-to-buy basis.

The reality was that a significant number of the senior political elite, including Gono, gave themselves irrigation schemes, brand new tractors, combine harvesters and implements that genuine farmers would have given their eye teeth to have had.Â  Unsurprisingly, this self-serving Reserve Bank scheme failed too.

And when it came to the politicians paying back the debt, which by this stage had ballooned to US$1.3 billion, they simply voted in parliament to write off what they each owed, passing on the debt for their misadventures to the people.Â  Thatâ€™s command agriculture at its most cynical.

Gono, readers may remember, achieved infamy in 2008 for printing the 100 trillion Zimbabwe dollar note that became valueless within days. This ill-fated note, along with previous hyper-inflated denominations, including the Z$10,000,000,000,000 (ten trillion) note, could be exchanged for U.S. dollars until the end of April 2016, but it was worth only about $0.40.Â  It is currently fetching significant higher prices as a novelty item on websites such as eBay.

Now in 2016, through Vice President Emmerson Mnangagwa, our politicians have suddenly announced another grand command agriculture scheme costing US$500 million.Â  This time they wish to fund a select politically supportive set of 2,000 farmers who will each apparently grow 1,000 tons of maize for the State. Any excess over the 1,000 tons can be retained by the farmer. Each farmer will be earmarked to receive US$250,000 to produce his 1,000 tons.

There will of course be a great rush for that money.

An opportunity such as this, which will give the so-called farmer both status and financial benefit, will have significant appeal. In a country where poverty is dire, where the vast majority of title deeds have been nationalised, and where the banks have run out of money, itâ€™s almost impossible to get money from anywhere on that scale.

When the political elite and their friends gain that money though, they will suddenly realise that itâ€™s actually not enough. Â Installing irrigation schemes costs a great deal more than the allocated US$1,250 per hectare.Â  After that, there is also the cost of tractors, tilling equipment, planters, combine harvesters, sprayers, fertiliser, seed, diesel, electricity, chemicals, wages â€“ and so the list goes on.

If the scheme is going to genuinely finance 400,000 hectares of irrigated maize production, a great deal more money will need to be found from somewhere.Â  In a bankrupt state that puts its policemen out to collect their pay at innumerable roadblocks, this will be nigh on impossible.

Time is not on their side either.Â  Attempts to capacitate 2,000 farmers with 200 hectares of irrigation each in the next three months before planting season will be interesting to watch.Â  The development of 400,000 hectares of irrigation took the former commercial farmers – with title deeds, good farming practices, careful loan management and repayment, as well as world-class extension services – decades of hard work to achieve.

To believe that the â€œnew farmersâ€ will have 400,000 hectares of irrigation up and running in the next three months is like waving a magic wand and claiming that Air Zimbabwe will start flying to the moon and back next year.Â  Air Zimbabwe, like Zimbabwean agricultural, is virtually grounded.Â  It wonâ€™t happen.

The other element of the Command Agriculture grand scheme is the irrigation of pastures for beef export.Â  The 2,000 hectares of irrigation at ARDA-Ngwezi Estate in the dry Matabeleland South province will reportedly support 60,000 beef cattle.Â  This will require a carrying capacity of 30 cattle per hectare â€“ a feat which is unequalled in the history of cattle farming.

Zimbabweâ€™s debt arrears to the IMF, World Bank and African Development Bank is currently US$1.8 billion, which is a massive external debt for the country given its imploding economy.Â  To put this into perspective, Zimbabweâ€™s 2015 budget, a paltry US$4 billion, was in fact smaller than the annual turnover of each of South Africaâ€™s two largest supermarket chains the same year:Â  Shoprite Group (US$8 billion) and Pick â€˜n Pay (US$4,7 billion).

Finance minister Patrick Chinamasa needs to explain to increasingly restive Zimbabweans where the money is coming from to fund this latest scheme, and how it will be repaid.

In my view, the entire Command Agriculture concept is another blundering, totalitarian control and patronage scheme that is doomed to fail to feed the nation.Â  Stalin, Mao, Polpot, and others, in the days before food aid, oversaw comparable schemes and millions of people perished.

At â€œIndependenceâ€ in 1980, John Robertson, as Finance Editor of the Financial Gazette, provided the solution to the new authorities in the Zimbabwe administration: â€œGive all farmers title deedsÂ  -regardless of whether they are black or white, large-scale or small, communal or commercial, and we will see the economy boom sustainably.â€

The response to his carefully crafted plan from the new ZANU-PF leaders was categorical: â€œWe donâ€™t want to empower the people that much.â€Â  It was an echo of the response that he had had when he put the same proposal forward to Ian Smithâ€™s Rhodesian Front administration in 1976.

The last 16 years have seen the nationalisation of the vast majority of agricultural title deeds in Zimbabwe.Â  The empowerment of the people with title deeds is simply anathema in control politics.

Hunger – and of course food aid – will remain the net result of denying private property rights.

The war veterans who spearheaded the brutal take-over of the commercial farms were never given title to the land they stole and the commercial farmers have not been compensated by the government.Â  In international law, the farmers remain the title holders.

Had this been a genuine land reform programme, the commercial farmers would have been compensated so that the invaders who had taken over the farms, or the people who had been allocated land, could produce the title deeds as collateral for bank loans.

During the farm invasions, the war vets had the backing of the government, the police and the national defence force.Â  However, the situation changed dramatically last month when the war veterans from the Zimbabwe National Liberation War Veteransâ€™ Association issued a powerful communiquÃ© castigating Mugabe and his corrupt government and withdrawing their support.

In response, Saviour Kasakuwere, ZANU PFâ€™s national political commissar, threatened to take away their stolen farms.Â  The war of words and threats continues to rage.

To become a successful agricultural nation once again, Zimbabwe needs to follow the advice John Robertson gave in 1980 and recognise the title deed owners for what they are: â€œownersâ€; and then create new title deeds throughout the country where title deeds have never existed before.Â  If that is done, within a short period of time, Zimbabwe will once again be not only food secure but a thriving nation with produce, jobs and development.

In spite of ZANU PFâ€™s latest control agriculture programme, the fractured party is losing ground rapidly. Â I am confident that when change comes, a new, elected government will be committed to empowering and supporting those who genuinely wish to farm. Every successful agricultural nation has achieved success on the back of title deeds being issued and upheld as sacrosanct and the new government will see that.

Although the day has not yet dawned, I believe that the protest action taking place across the country indicates the tide is turning and that ZANU-PFâ€™s totalitarian and controlling rule is at last beginning to draw to a close.

Ben Freeth is the executive director of the Mike Campbell Foundation and the spokesperson for SADC Tribunal Rights Watch.