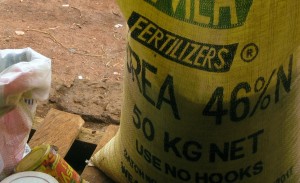 Phillip Tshuma is a happy farmer. Despite one of the worst droughts ever to hit his country, Zimbabwe, Mr. Tshumaâ€™s maize and small grains harvests this year are 50% more than they were in 2015, thanks to micro-dosing, the targeted application of small quantities of fertilizer in a field.

Using the micro-dosing method, farmers apply about 8 kg to 10 kg of nitrogen fertilizer per hectare, approximately a fifth of the recommended application rates.

Last season, Mr. Tshuma made about $350 in profits from his harvests, a decent amount in a country where most survive on less than $1.25 per day. He plans to spend a third of that on nitrogen fertilizer for use in the next season. If things go as anticipated, he will make more profit each season from his farm in the Hwange District in southern Zimbabwe.

It was only a decade ago that African leaders adopted, at a special summit in Abuja, Nigeria, a 12-point resolutionÂ on the use of fertilizer as part of efforts to achieve an African â€œGreen Revolution.â€ They acknowledged that inorganic fertilizer alone could not lift agricultural output, and requested countries to commit to increasing fertilizer use from an average of 8 kg of fertilizer per hectare in 2005 to 50 kg per hectare by 2015.

With a Green Revolution, Africa would be following in the footsteps of Asia and Latin America, where effective policies, new farming methods, improved inputs and high-yield seed varieties have improved harvests and reduced poverty.

Although no country has met the target for 2015, Rhoda Peace Tumusiime, the African Union commissioner for rural economy and agriculture, says there is no need to despair and that countries should instead continue to invest in improving access to fertilizer for smallholder farmers.

Richard Mkandawire, the vice president of the African Fertilizer Â and Agribusiness Partnership (AFAP) â€” an organization that promotes investment in commercial fertilizer in Africa â€” says that despite failing to meet the target, some countries made significant progress in increasing their use of fertilizer.

A World Bank report notes that between 2005 and 2015, Ethiopia recorded the highest proportional increase of fertilizer use per hectare, from 11 kg to 24 kg. Within the same period, Ghanaâ€™s fertilizer use increased from 20 kg to 35 kg per hectare and Kenyaâ€™s from 33 kg to 44 kg. Â As a result of the increase in fertilizer usage over the 10-year period, the countries recorded growth in farm yields and in the agriculture sector generally, with Ghana notching a 4.6% growth in 2014, according to the Ghana Statistical Service. In Kenya there was a 56% increase in smallholder fertilizer use, and maize yields increased by 18% between 1997 and 2007, according to data from a nationwide household survey.

A bit of fertilizer goes a long way

In March 2016, Amit Roy, a former president of the International Fertilizer Development Center, told the Food and Agriculture Organization (FAO) regional conference for Africa in CÃ´te dâ€™Ivoire that while Africa had not achieved the fertilizer use targets set under the Abuja Declaration, it was on course to reach at an average of at least 17 kg per hectare by 2018. Although this will still represent a modest improvement, it will be double what it used to be when the declaration was made.

Nevertheless, fertilizer demand in Africa has been rising since 2008, particularly in sub-Saharan Africa, where usage has increased by 130%, says theÂ International Fertilizer Development Center, a group that seeks to increase agricultural productivity by promoting crop nutrition and agribusiness skills.

Mr. Roy reckons fertilizer demand will reach 7 million metric tons by 2018, although this figure will represent a mere 2% of global consumption. Brazil, China, India, and the US drive global fertilizer consumption collectively, accounting for 55% of global demand.

The evidence that micro-dosing could be a breakthrough method in increasing fertilizer use in Africa is demonstrated by Mr. Tshuma, who is one of the 170,000 households in Zimbabwe giving it a try. His cereal production, which has since doubled, has significantly improved his familyâ€™s food security. By promoting micro-dosing, Zimbabwe is already saving $7 million in food imports annually, according to the International Crops Research Institute for the Semi-Arid Tropics (ICRISAT).

Micro-dosing is affordable and, when adopted by smallholder farmers, enhances fertilizer use, says ICRISAT, adding that the returns on investment are still higher than before.

Mr. Tshuma maintains that the small amounts of fertilizer he uses in micro-dosing yield bigger returns without much money. He would need to spend over $300 per season on fertilizer alone if he applied the 50 kg per hectare that African leaders set as a threshold.

In Zimbabwe, ICRISAT used crop models to study the cost of micro-dosing and how the practice works. The study found that, contrary to conventional wisdom, even small amounts of fertilizer can increase yields significantly. Using micro-dosing, farmers apply about 8 kg to 10 kg of nitrogen per hectare, approximately a fifth of the recommended application rates.

Martin Moyo, a scientist at ICRISAT, says that despite obvious benefits, not many Zimbabwean smallholder farmers practice micro-dosing due to lack of knowledge, as well as difficulties with availability and affordability. There are also cultural and traditional beliefs that discourage farmers from the practice, such as the belief that fertilizers â€œburnâ€ crops.

A decline in soil fertility resulting from mono-cropping, degraded soils and other factors, often blamed for the drop in crop yields across Africa, ought to encourage African smallholder farmers to use fertilizers.

Fertilizer use supports soil quality and also helps mitigate the effects of soil erosion and nutrient depletion. A 2015 FAO report titled The Status of the World’s Soil Resources urges countries to encourage farmers to return crop residues and other organic material to the soil, employ crop rotation with nitrogen-fixing crops and carefully use organic and mineral fertilizers.

â€œFertilizer is key to Africaâ€™s food security and we need to keep pushing private-sector involvement in its development,â€ said Ms. Tumusiime.

To boost agricultural productivity, African countries must embark on mechanized agriculture and increase fertilizer use, says Grace Akello, Ugandaâ€™s ambassador to Italy and also representative to the FAO and the UN World Food Programme, adding, â€œWe have to raise productivity of our agriculture by improving the health of our soils and increase fertilizer use because we are aware of the poor conditions of soils in many parts of Africa.â€

There is a need for Africa to accelerate sustainable soil management practices and capitalise on the Africa Fertilizer Financial Mechanism set up by the AU at its Africa Fertilizer Summit in 2006 to promote fertilizer use, advises Mr. Roy.

Last July, a meeting organized by AFAP and the International Food Policy Research Institute (IFPRI), a global agricultural research centre, to review progress on fertilizer use in the region concluded that while several regional economic communities have established successful regional fertilizer markets, they still face poor infrastructure and distribution networks, as well as problems with storage and local blending facilities.

Smallholder farmers will increase their fertilizer use if they can get affordable access, said Mr. Mkandawire. â€œLimited fertilizer access leads to prohibitively high costs, resulting in smallholder farmers using less or not at all. This ultimately leads to the low-level productivity trap. In such a trap, constraints such as lack of fertilizer investment incentives [and a] stagnant rural economy reinforce each other,â€ Mr. Mkandawire said.

Most smallholder farmers are already stuck in a low soil fertility â€• poverty trap, making it impossible for them to afford inputs needed to increase productivity and end hunger, Mr. Mkandawire explains.

Experts agree that micro-dosing, increased fertilizer use, private-sector investment, improved access to credit, reduction in import costs, smart subsidy programmes and accelerated sustainable soil practices will help Africa realize its Green Revolution dream. The challenge is for countries to work with the experts and follow through.