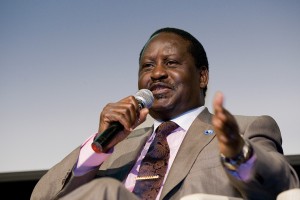 After Kenyaâ€™s election in 2013, a challenge by former Prime Minister Raila Odinga made its way through the courts.

Mr. Odinga challenged the outcome, claiming the election had been marred by massive failures in the electronic voter identification system, the tallying system and the results transmissions system. In an affidavit, the electoral commissioners termed him a â€œperennial loser.â€

He lost the petition and the matter was quickly settled.

With the next general elections now around the corner, Kenyaâ€™s Independent Electoral and Boundaries Commission (IEBC) has become a target for the opposition. Protestors were demanding that it be disbanded for lack of impartiality.

Because the entire nine-member commission is appointed by the president, opposition critics want a change in the composition of the IEBC. The powerful body oversees elections, ensures voter lists are up to date and supervises counting.

â€œThe question is whether the current IEBC commissioners can be impartial in an electoral contest in which my party is a contestant,â€ said Mr. Odinga in a statement.

This is an example of the many conundrums electoral management bodies face in many parts of Africa. â€œElections are about power. They designate who will control power and lead the community,â€ observes ArsÃ¨ne Bado, a political scientist and an associate researcher at the Centre de Recherche et dâ€™action pour la Paix in Abidjan, CÃ´te dâ€™Ivoire. In some highly charged situations, he notes, an election may be the â€œperfect trigger for conflict and political violence.â€

To avoid violent eruptions, African countries are now paying more attention to ensuring conditions that are conducive to credible and peaceful elections. They are keen on building credible election management bodies to act as cornerstones of the democratization process.

In West Africa, for example, elections are beginning to serve more purposes than simply determine which leaders are elected. They are emerging as tools of conflict prevention, according to the International Institute for Democracy and Electoral Assistance (IDEA), an intergovernmental organization based in Stockholm, Sweden, that supports democratic reform.

In 2015â€™s hotly contested Nigerian presidential election between the Peopleâ€™s Democratic Party of incumbent President Goodluck Jonathan and the All Progressives CongressÂ of Muhammadu Buhari, a former military ruler, many feared the worst. In Africaâ€™s most populous nation, elections have always been marred by violence, often fueled by allegations of vote rigging.

Nigeriaâ€™s Independent National Electoral Commission (INEC) managed to oversee what was generally acknowledged as free and fair elections. The INEC chairman, Attahiru Jega, after being forced to postpone the elections for six weeks, was under heavy pressure from politicians to resign but resisted.

A disputed election would have sparked violence in the country, with consequences for the whole West African region, where Nigeria remains an economic heavyweight. Alone, the country accounts for more than three-quarters of the regionâ€™s economy.

Analysts breathed a sigh of relief when Mr. Jonathan quickly accepted defeat, conceded and congratulated his opponent, President Buhari. Many hailed the development as â€œhistoricâ€ for the country and for Africa.

For most African leaders, the challenge has always been to guarantee an electoral process that truly reflects the peopleâ€™s choice, even if it is at the leadersâ€™ own expense.

The role of electoral bodies

Students of government see elections as political processes rather than a one-day exercise. Effective electoral management bodies are expected to midwife an election, making sure it does not end in a stillbirth.

As public political spaces gradually open across Africa, more and more citizens are using the new avenues to speak out for political, economic and social rights, and to demand greater accountability from their governments, including regular free and fair elections. Such elections require an impartial electoral management body that respects ethnic diversity to build public confidence in electoral processes and ensures transparency, integrity and fairness to all parties involved.

â€œIn order for an electoral management body to operate efficiently and effectively, it must be staffed with individuals who are competent and have skills to manage elections in a fair and credible manner,â€ says John Mukum Mbaku of the Brookings Institutionâ€™s Africa Growth Initiative, a US-based think tank.

At the very least, Mr. Mbaku notes, a credible electoral management body should be granted five things: decisional independence to decide freely, institutional independence to perform its functions without undue interference from the government, adequate resources, a system of accountability, and a procedure civil society can use to file complaints against members of the electoral body for illegal or unethical conduct.

In addition, there should be an impartial disciplinary system that allows for a range of sanctions against wrongdoing and abuses by electoral commissioners and staff members, including removal from office.

â€œThe electorate ought to be adequately informed of voter rights and obligations, date and procedures of the elections, political party or candidate options available, and above all, the importance of citizens participating in the exercise,â€ notes the National Democratic Institute, a Washington, D.Câ€“based nonprofit organization that works with governments worldwide to strengthen and expand democracy.

This is important because elections and political transitions have been among the threats to peace and security in Africa in the last 20 years, according to the African Union (AU). Incidents on the actual voting day can trigger political violence, conflict or sometimes full-blown wars.

The Brookings Institution lists Angola, Burundi, Central African Republic, Congo, Kenya, Nigeria and Zimbabwe as some of the countries where elections have aggravated societal divisions and political violence. Divided societies, including war-torn areas, can become â€œdangerous placesâ€ if elections are held, they say.

In response to these emerging threats to peace and security on the continent, the AU Commission created the Democracy and Electoral Assistance Unit to coordinate the participation of the AU in observing elections, while providing technical and electoral assistance to election management bodies of member states.

Election monitoring, wherein nonpartisan international or local organisations or individuals observe, assess and report on a countryâ€™s election exercise, is critical in helping to build trust and public confidence in electoral processes, and can also help deter or correct errors or fraud.

In Africa, the UN, EU and regional bodies, such as the Southern African Development Community, the Economic Community of West African States and the East African Community, frequently send election monitors to member states.

Additionally, the Electoral Assistance Division of the UN Department of Political Affairs provides technical assistance to help countries build credible and sustainable national electoral systems. More than 100 countries have requested and received UN election assistance since the divisionâ€™s creation in 1991.

The division assists with electoral administration and planning, review of electoral laws and regulations, electoral dispute resolution, voter registration, election budgeting, logistics, procurement of election materials, use of technology, training of election officials and election security, among other aspects of the election process.

So far Africa has made progress, considering the long and treacherous path that electoral management bodies have had to navigate, experts say. This is particularly so given that at independence, African countries inherited quasi-autonomous bodies that had been tightly controlled by successive regimes using them as instruments to retain power.

â€œFrom the 1960s to the 1990s, a combination of weak electoral management bodies, legislature and judiciary versus a strong executive was fatal for electoral governance and democracy in most countries,â€ notes the African Governance Report 2013 published by the UN Development Programme and the UN Economic Commission for Africa. However, social movements and civil society pushed for political and constitutional reforms that ensured electoral bodies would improve.

Such improvements notwithstanding, electoral bodies still face challenges in conducting free and fair democratic elections, and some countries continue to experience flawed elections that, according to the report, are made so by electoral maladministration, manipulations and mismanagement.

Other concerns include how to manage electoral bodiesâ€™ power over political parties, the professionalism and powers of the electoral bodies, the role of stakeholders as partners, electoral dispute adjudication, security for elections, and electionsâ€™ steep costs, according to the African Governance Report.

However, countries in Africa can address these concerns by enshrining the electoral bodies in constitutions or other statutory provisions.

Fortunately, in the last two decades, countries have been working round the clock to resuscitate, redesign and reorganize election management bodies to ensure operational and financial independence, professionalism, transparency and impartiality so that they can contribute to the integrity of elections, says IDEA.

Most electoral bodies in Africa have been rated fair in their performance by the UN, with Ghana, Mauritius, Seychelles and South Africa showing the best ratings for their democratic institutions.