This is an extract from one of the 2013 chapters of Sharon Pincott 's book, Elephant Dawn titled â€˜Bulldog with a Boneâ€™ â€“ which came after it was reported that hundreds of elephants had died from cyanide poisoning in Whange Game Park. 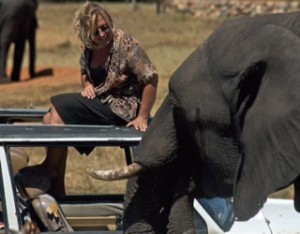 Sharon hanging out with the elephant she named Misty. (Photo courtesy of Mark Stratton).

A delegation of ministers flies into Hwange to discuss this catastrophic poaching case and Minister Kasukuwere invites me to meet him at the airport, to chat during his chauffeured drive into Main Camp. He is indeed a big bear of a man. Without a line on his face, he looks like heâ€™s been Photoshopped.

A few weeks later, after more poisoned elephants are discovered even closer to Hwange, IÂ contact Minister Kasukuwere again and suggest we urgently need to see what is really going on from the air. â€˜If we can arrange a plane and a pilot, prepared to fly for free, will you provide the fuel?â€™ IÂ ask.
â€˜Absolutely,â€™ he says, without hesitation.
And instantly we have an agreement. IÂ speak to a contact in Wildlife Environment Zimbabwe, whose assistance will be crucial, and then to a white Zimbabwean in Harare named Pat Cox, who will pilot his own plane, a Cessna 206, which has room for five pairs of eyes in addition to the pilot. Minister Kasukuwere does exactly what he said he would, and the fuel is paid for and ready for collection. Iâ€™ve never experienced such efficiency here when dealing with a government department.
I urge vigilance since we donâ€™t know who is involved in this poaching racket, and how much our presence will ruffle feathers. The fuel, and also the plane while itâ€™s on the ground in Hwange, is subsequently secured against sabotage. We donâ€™t manage to secure against hyenas, however, and overnight one chews the tip of the tailplane (a small wing which provides stability). We awake to fragments of plane scattered on the ground.
â€˜Do you have any duct tape?â€™ Pat asks.
â€˜Really?â€™ IÂ screech.
I loathe light aircraft, and now Iâ€™m flying in one patched with duct tape after itâ€™s been chewed on by a carnivore! Pat gives me motion sickness tablets and IÂ suck away on his boiled sweets, as six of us fly in previously plotted, tight transects, scanning for carcasses. Pat flies as close to the ground as he dares. What we see over the course of several days confirms that a tragedy has certainly unfolded here, but thankfully the number of elephants dead from poisoning is less than half that reported.
There is, however, an additional alarming find. â€˜It may just be rocky boulders, but thereâ€™s something way out to the left,â€™ IÂ shout over the roar of the engine. â€˜You need to circle around.â€™ Simion, a National Parks scout who IÂ respect, sees something too. Unlike some of his colleagues in the plane, he never nods off. We are all anxious as the aircraft banks around.
And there they are: another eight elephants dead. Fresh carcasses, with tusks already gone, lying quite close to a key Main Camp tourist spot inside Hwange National Park. Simion is immediately on his mobile phone, calling in ground forces, ensuring that theyâ€™re ready to get into the field immediately upon our return to base. Pat takes coordinates and IÂ take photographs to show the Parks warden.
When we land, IÂ phone Minister Kasukuwere with the disturbing news.
I donâ€™t even want to think about what this new bout of poisoning would have escalated into, had these flights not happened at once. Minister Kasukuwere is quick to demand further action and answers from his men on the ground. No Presidential Elephants have been affected, but itâ€™s all now far too close for comfort.
Simion is back in the field without delay, where he and other rangers discover three additional carcasses and uncover buried ivory. They track a lone poacher and show him no mercy. But it is the Mr Bigs of the poaching rings who continue to evade capture.
These poachers are poisoning mineral licks with cyanide, a substance that is supposed to be strictly controlled. Even a creature as mighty as an elephant doesnâ€™t get more than 50 metres or so before the poison takes its toll. Itâ€™s a simple way to kill. There is no telltale noise from rifles. Thereâ€™s also no need to hack off the face with an axe, which is a time-consuming and messy task, since the poison causes the bodies to decompose rapidly, and within just a day or so the tusks slide out of their sockets effortlessly. There are ancillary deaths in the animal kingdom but thankfully not as many as might be expected. This type of poison not only quickly turns the meat putrid, making it generally unpalatable, but it also very quickly detoxifies. Hungry animals that get to the elephant carcasses swiftly, however, most notably flocks of vultures, are certainly poisoned.
Minister Kasukuwere and IÂ have kept in touch every day. While Pat is flying back to Harare, IÂ suggest to the minister that he might like to personally thank Pat for his time and generous use of his aircraft. He invites Pat into his offices for a cup of tea. Then he goes one better, and thanks him on social media. He thanks me publicly too, which is a first from any official here.
After it is admitted that poisoning has been going on for some time, the Parks warden on the ground in Hwange casually describes his lack of reporting as â€˜an oversightâ€™. Minister Kasukuwere, on the other hand, publicly acknowledges serious problems not only with out-of-control poaching, but with tree-felling, abuse of wetlands (for development), and also the contamination of waterways. He may be a thug, but perhaps a thug is what we need right now.
â€˜Heâ€™s like a bloody big bulldog with a bone,â€™ IÂ say to those who ask about him.
Post published in: Entertainment