The chess community is glued on their laptops and smart phones as they watch the games in progress. Our teams are playing well in this tournament which is being held in Baku. Zimbabwean men have so far won 3 games drew one against Belgium and two losses. 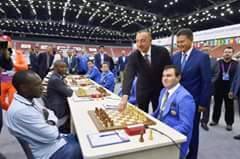 IM Rodwell Makoto on board one for Zimbabwe

International Master Rodwell Makoto and Spencer Masango drew their games while IM Mandizha and Elisha Chimbamu lost their games.In round four they then played against Kuwait and the team won 3-1. The only player to lose for Zimbabwe was Spencer Masango. In round five the team played against Azerbaijan team 3 and they won 2,5-1,5.Â  IM Makoto lost to FM Acadli while IM Mandizha won against FM Bashirli, on board 3 Mushore drew against FM Gadimbayi while Elisha Chimbamu saved the day by his win on board four against FM Gasimov in a game which was seemingly lost but he fought hard until the final minutes ofthe games playing some computer moves which earned the much needed point.

In round six our team played against a higher rated Belgium who they drew against in a pulsating encounter. This match was played by IM Makoto on board one, IM Mandizha on board two, Spencer Masango on board three and Emerald Mushore on board four. Makoto drew his game on board one, while Mandizha also drew, Masango lost his game while Mushore saved the day for our team when he defeated his opponent in a tricky game which was very tactical. They upset their opponents who were highly rated than our boys. In the ladies section the ladies put up a brave fight against South Africa when they won the game 3-1 in one of the major upsets of the tourney against the bitter rivarls.

Colleta Wakuruwarehwa defeated Â WIM Frick Denise, while Tatenda Zengeni lost to WIM Anzel Laubscher. Valentine Pasipanodya won her game so was Kudzai Charinda to win the game as well as the match 3-1. Valentine defeated WCM Â Fischer while Charinda Kudzanai won against WFM Niekerk. They also went on to beat Mozambique 2,5-1,5 after their loss to England by a white wash.Â  The ladies had to come out for a very big upset when they took on Panama.The teams were tied on 1,5 a piece when Zengeni Tatenda played the final game which won the match against the highly rated players in round six. She defeated WCM Munoz Alba who was rated highly than her, Valentine is the only player who lost. Nomalungelo Mate played a very interesting game against Gonzalez Yaribeth 1826 to cape a fine performance for the ladies.

On board four WCM Chung Yaleika 1797 drew against Kudakwashe Charinda. Zimbabwe eventually won the match 2,5-1,5 in one of the best upsets of the day. The tournament continues until the 13th of September. On a sad note esteemed Â school teacher and chess Administrator Â Joseph Moyo sadly Â passed on and was buried in Chegutu on 7 September . I have known him since he was at Mabvure secondary school and Msengezi High school. He worked tirelessly to promote chess talent Â and was a true servant of education and chess. IM Farai Mandizha is his product as well as Gift Sithole. He left a legacy on the chess fratenity which will be remembered for generations. He even taught his own son Mpumelelo Moyo who became a Candidate Master in Botswana, 2011. May his soul rest in eternal peace.