The Helen Hove Community Elderly Care Trust (HHCECT) together with the Centre for Community Development Solution (CCDS) and officials from the National Ageing Network of Zimbabwe (NANZ) have united in calling for the empowerment of the elderly and the immediate end to all forms of violence against and abuse of the aged. 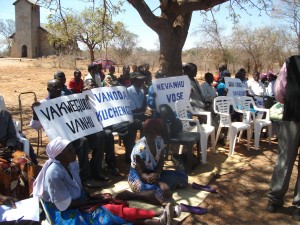 Speaking at the commemoration dedicated to elderly people, district co-ordinator of the CCDS, Walter Mutenheri said his organisation was established to ‘make their communities a safe place for the elderly peopleâ€™.

Addressing about 500 people gathered at the Trustâ€™s Arts and Craft Centre near the Lutheran Church in Mberengwa on Friday, district administrator, White Nkoma said: â€œProper care is the lifeline to empowerment and liberation of the elderly. There is need for a collaborative effort. Todayâ€™s theme speaks volumes as it challenges us to take a stand against ageism. I urge you to stand against violation of these golden girls’ and boysâ€™ human rights.â€ he said at the International Day of Old People celebrations.

Nkoma describes elderly people as fountains of wisdom from whom young people should siphon knowledge: â€œI wish that there were more young people here today so that they could learn just how important these ‘golden oldies’ are to everyone.

â€œI know that the elderly are sometimes called disgusting names, some associated with witchcraft. This is not good. Elderly parents struggled hard to raise the present generation, who, now that they are educated, call those elderly people insulting, dirty names. Please stop this!â€ he stressed.

Scores of speakers hailed former nurse Gogo and praised all three organisations and community leaders for their initiative and portrayal of a true spirit of advocacy by zeroing in on the human rights violations of the aged in the name of culture and religion. 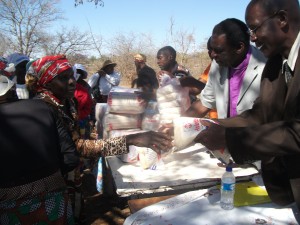 The nearly 500 octogenarians who attended the event where each given a 2kg packet of sugar courtesy of CCDS as a token of appreciation.

We recognise and appreciate cultural and religious diversity. However, research has unearthed that it is often those who should be our nearest and dearest relatives, particularly â€˜varooraâ€™ or daughters in law who are often the worst perpetrators of harassment and other abuse against the elderly.

â€œThe buildings are in desperate need of a new roof, paint and windows. In fact, it needs a complete renovation because the home is no longer suitable for the elderly. Those ladies born between 1924 and 1934 desperately need donations of clothing. The home also desperately need blankets, food and household goods as well as a water pump to resume the, long shelved, proposed gardening project,â€ she told this journalist.