Heal Zimbabwe Trust ( HZT) expresses concern over the continued worsening cash crisis in the country. The cash crisis has been inflamed by the continued economic decline which has caused untold suffering amongst citizens. Heal Zimbabwe notes that for the good welfare of citizens and continued prevalence of peace, the Government must swiftly move in to address the crisis. 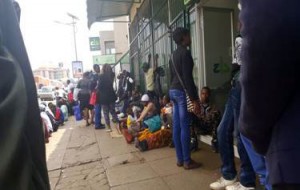 Citizens seen queue for their hard earned money at banks for long hours.

Recently, Zimbabwe has been witnessing a wave of protests by citizens over a wide range of issues that include corruption, deteriorating socio-economic environment, police brutality and high unemployment rate among other challenges.

It is HZT’sÂ  assertion that if citizensâ€™ concerns remain unaddressed, this is likely to trigger fresh waves of protests against the Government. According to a survey carried by Heal Zimbabwe on 4 October 2016, several banks such as POSB, FBC, CABS, ZB, CBZ and Barclays were not disbursing cash on their automated teller machines (ATMâ€™s).

Long queues were a common feature outside many banks with no indications that the banks were going to give people their money. Particularly banks such as CABS, POSB and FBC, they did not have any ATMs functioning and this resulted in long queues as people waited patiently with the hope that they were going to get their money that remain trapped in the banks.

Some of the citizens who were interviewed by Heal Zimbabwe said that if the cash situation does not improve, they will not hesitate to join protests called for against the cash crisis. â€œ..I canâ€™t be denied access to my money that is held up in the bank, if the situation doesnâ€™t change, I will join in the next wave of demonstrations against the worsening cash crisis..” said Amos Muringai (49 years) who was queuing at one of the banks since 5am today but was told around 1pm that the bank had ran out of cash. Another citizen interviewed, pointed out that the current cash crisis is because of rampant corruption in Government. â€œ..Right now we are given cash limits on withdrawals of our own money but Government Ministers withdraw more than us…” said Margret Hamandishe (28 years).