In January 2016 T1 Wema1 dropped Tachigwinha featuring the 2015 ZimHipHop Award winner Ti Gonzi and Dancehall singer Galis Kush. The track got amazing reception from both the street audience and radio stations due to its quirky lyrics, dope beat and catchy hook. 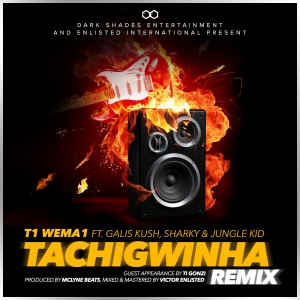 A number of Zimbabwean blogs posted some rave reviews on the track as well. Skilled beatmaker McLyne Beats produced the hit song whilst award-winning producer Anonzi Xndr handled the mixing and mastering.

On the backdrop of the success of the original Tachigwinha, T1 Wema1 then decided to enlist the services of rising hip hop stars Sharky and Jungle Kid to deliver one of the most lyrical tracks on the 2016 ZimHipHop scene. Tachigwinha Remix is mostly in the vernacular Shona and dwells on the inroads ghetto rappers are making in Zimbabwe. T1 Wema1, Sharky and Jungle Kid express these exploits with skilful wordplay, metaphors and mind-blowing rhymes.

T1 Wema1 is an upcoming rapper who has two ZimHipHop Awards (2015 edition) nominations. The talented rapper who hails from the ghetto parts of Harare enjoys a notable street and radio presence on the Zimbabwean entertainment scene. His 2015 debut album titled Inzwa included hot radio singles such as Chaka Kala, We On, Anochera Ngoda and Mangwana. His music video for Mangwana consistently featured on the DSTV Zambezi Magic Top Ten chart for 8 weeks and was on the number 1 spot for 2 weeks. T1 Wema1 aims to simultaneously entertain and educate with relatable and realistic lyricism in his music.