The expansion of sugar production in southern Africa has been dramatic. From its early beginnings in Natal to the huge commercial estates across the region established during the colonial era, new investments are being planned. The land rush in southern Africa is often a sugar rush, with the â€˜white goldâ€™ promising riches to governments, local elites and large corporates alike. 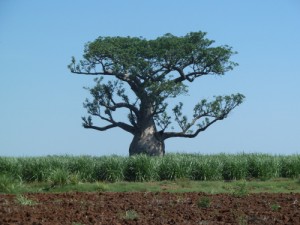 While sugar consumption is rising with increasing wealth and urbanisation, the prospects for export to the favoured European Union market look more fragile. In 2017 preferential trade access ceases, and with this the huge â€˜adjustmentâ€™ payments that some southern African countries and sugar corporates have received as aid. Nevertheless the sugar giants, mostly centred on three South Africa-based companies â€“ Illovo, Tongaat Hulett and TSB â€“ as well as new entrants, are still eyeing up cheap land, good soils and water resources for new ventures.

With these major changes underway it is a good moment to review the political economy of sugar in southern Africa. This is what a new open access special issue of the Journal of Southern African Studies does. There are 9 papers, with case studies from 7 countries across the region, and a valuable comparative overview of patterns of accumulation in different operations.

The issue argues that the regionâ€™s sugar industry provides a useful lens through which to understand current dynamics of corporate capital and agricultural production in Africa. The papers highlight the rapid concentration of corporate control over the past decade, but also the very diverse outcomes across the cases. Capital does not operate in a uniform way, and local contexts, resistances and struggles, and wider political economy make a big difference.

Taking the company Illovo (now owned by Associated British Foods), Alex Dubb shows how it gains high profits in Malawi due to favourable market conditions (notably preferential trade access and protected domestic markets) andÂ  high productivity (combining cheap field labour, land and water with capital-intensive milling). By contrast, Mozambican profits come exclusively from favourable market conditions, while profits in Tanzania, Swaziland and especially Zambia are due to particularly high levels of productivity. South Africa, Illovoâ€™s country of origin, receives low profits, making expansion across the region essential for commercial success. Value relations, at the heart of political economy, are core to understanding accumulation through sugar, Dubb argues. As companies seek to expand their operations, the search for cheap land, water and labour continues. As papers from Malawi and Tanzania caution, attempts at expansion of sugar land through grand development schemes â€“ such as the Green Belt in Malawi or SAGCOT in Tanzania â€“ may result in elite capture and exclusions of poorer people, even when â€˜outgrowerâ€™ approaches are advocated.

A central theme of the papers is an examination of the diverse patterns of â€˜outgrowerâ€™ sugar cane production. This is massively different in South Africa, Zambia, Zimbabwe or Swaziland for example, where starkly different relationships between the estate and mill and smallholder outgrowers (of different scales, and with different involvement in direct production) apply. While often presented as the â€˜inclusive businessâ€™ solution to corporate engagement with smallholders, it is clear that there is no single model, and relations between corporate capital, states and local producers varies massively.

How then should we understand sugar in southern Africa? Is the sugar industry part of a new developmental frontier in the region, transforming investment, market opportunities and livelihoods with a â€˜win-winâ€™ model, centred on linking core agro-industrial investments with outgrowers, as the industry and other advocates claim? Or is it a predatory form of capital, backed by elites and international finance, where production and market risks are transferred to vulnerable smallholders and estate labour; where land and water resources are â€˜grabbedâ€™; where a colonial model of exploitative estate production is at the centre, and profits are accumulated through monopoly power?

The experience in southern Africa suggests that these stereotypes rarely apply. While the logic of capital results in a relentless pursuit of profit, state agency and national political-economic context influence outcomes, as do local conditions. Local negotiations, resistances, and accommodations matter. The result is diverse patterns of production and profit, together with different livelihood outcomes for very different types of â€˜outgrowerâ€™, and quite different implications for different groups of estate labour, as shown for Xinavane in Mozambique, both in terms of gender relations and health and wellbeing.

With the vagaries of the international market dominating, and the changing fortunes of large corporate agribusiness capital in the region so deeply intertwined with this, we cannot predict whether the long-established corporation-state-outgrower relationship will persist. But for now, in all its variety and differing political dimensions, this relationship dominates the southern African sugar sector, and is central to understanding its contemporary political economy.