Along the banks of the river a burning bush Combretum in full flower is a sight to behold in Zimbabwe in late September 2016. Crimson flowers cascading along overhanging branches, their splendor reflected in the water, almost takes your breath away. 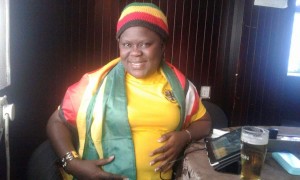 The days here start with a magnificent pink sunrise and end with the grunting of hippos while in the heat of the day crocodiles patrol the river and an extravaganza of colourful birds flit between towering riverine trees. In the surrounds there is a bounty of wildlife: sable, kudu, giraffe, zebra and, if youâ€™re lucky, the shy, beautiful bushbuck, its white spots startling against the russet of its rich coat. This is Zimbabweâ€™s lowveld and its hot and dry here, the bush is sparse, dusty and scratchy at this time of year with most of the trees leafless, waiting for the season to change, the rain to arrive.

There are so many hidden gems just like this, all over Zimbabwe with a few simple chalets giving you a chance to revive flagging spirits; beautiful but tenuous, hanging on by a thread, desperate to survive until things change in Zimbabwe. A few visitors trickle in but barely enough to pay the bills and meet the monthly wages. On the surface it all looks so easy: we are a country filled with beautiful places, magnificent scenery, abundant natural resources, spectacular flora and fauna, resourceful, educated, welcoming people and yet we are stuck.

We are just stuck, there seems no better way to describe a country ruled by the same person for 36 years with a leadership that is bereft of ideas, devoid of empathy and which seems to have absolutely no clue how to get us out of the economic collapse they have bought upon us.

We are now headlong into the second economic collapse in just eight years and life is getting harder by the day.

Itâ€™s not long before the rains now and itâ€™s a time of year when the contrast between â€œthem and usâ€ is more noticeable and startling than ever. As you pass through remote country areas you see a population that is stuck in a gruelling way of life that, 36 years after Independence, has hardly changed at all. Women and girls walk kilometers to collect water from rivers, carrying it home in twenty litre containers on their heads. Imagine a life where every drop of water you use, for bathing, cooking and drinking, has been carried on your mother, sister or daughterâ€™s head. Then thereâ€™s the laundry, carried for hours in a tin bath on top of someoneâ€™s head to a river where itâ€™s washed, rinsed and carried home. Wells and boreholes are dry, there are no pipes or taps here, no bowsers, no bulk water deliveries. How can this be, 36 years after Independence?

Passing village after village you see children herding cattle, children who should be in school; you see mothers and children sitting on the roadsides selling bowls of wild fruits, onions or tomatoes. You see women carrying huge piles of firewood on their heads and you get brief, shadowy glimpses of men panning for gold or digging in the dirt and old mine tailings, looking for minerals that they can sell. 90% unemployment; how can this be, 36 years after Independence?

Then, less than ten kilometers down the road, the contrast comes and itâ€™s so dramatic as to be almost unbelievable. Huge mansions with high walls topped with razor wire. Guard houses at gates, double garages, double stories with balconies surrounded by ornate balustrades, floor to ceiling glass windows. Sweeping, lush green lawns with irrigation sprinklers ticking round and round, hour after hour. Many are brand new properties, still under construction and you have to wonder where and how people in our destitute, beggar nation have got the money to construct these extravagant mansions.

As you edge closer to the capital city the messages start coming in on your cell phone. News comes that activist Linda Masarira has at last been released from prison but more activists have been attacked, injured and detained. Other messages warn of events in progress:

â€œStay out of Harare CBD!Â  Stone throwing, tear gas, running battles between vendors and â€˜youthiesâ€™ (pro government youths).â€ The next day the president of the UZ Students Union, Tonderai Dombo is arrested for holding up a placard asking for jobs. To these images you donâ€™t need to ask how this can be happening 36 years after Independence. You know the answer: too long in power.

A new slogan is gaining momentum in Zimbabweâ€™s wind of change:

â€œInjure One, Injure All.â€ It says it all because it doesnâ€™t matter if youâ€™ve got a bucket of water on your head, are sitting on the roadside selling tomatoes, waiting for hours to withdraw a fraction of your own money from the bank, canâ€™t afford rent, school fees or medical treatment or are arrested for holding up a placard, the bottom line is â€œInjure One Injure All.â€

Until next time, thanks for reading, love Cathy.