In 2000, as land invasions occurred around Zimbabwe, there were many calls for the sugar estates to be taken over. Indeed, there were a number of occupations of â€˜whiteâ€™ outgrower farms on the lowveld estates. This coincided with major strikes, and the burning of large areas of cane. Yet high-level negotiations and political manoeuvring averted wholesale takeover. 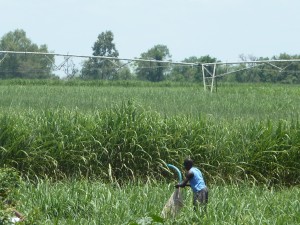 Despite the rhetoric, the strategic importance of the sugar industry to the national economy was recognised and the state and the sugar companies brokered compromises. The result was the subdivision of former settler outgrower areas in Hippo Valley and Mkwasine estates and their transfer to now around 800 land reform beneficiaries who had applied through the A2 scheme, designed for medium-scale enterprises and suited to those with capital and expertise. The sugar outgrower land reform represented nearly 16,000 ha, leaving about 30,000 ha as core estate land.

How have the new outgrowers fared? In a new open access paper published as part of the Journal of Southern African Studies special issue on the political economy of sugar in southern Africa (see last weekâ€™s blog for an overview), we explore this question with data over 12 years from Hippo Valley from 2002. Following land reform, company officials, government extension agents and others were sceptical that the new outgrowers would be able to supply sugar in amounts and at the quality required for Tongaat Hulettâ€™s two mills at Triangle and Hippo Valley. They argued that the new outgrowers were given portions of land that were â€˜unviableâ€™, and that commercial sugar growing could only occur on irrigated plots of more than 35 ha. Further, they argued that the land reform beneficiaries did not have the skills for the highly technical and demanding process of sugar production. And finally they suggested that a politically-driven land reform process was inimical to economically successful production, and that the investors would flee, abandoning Zimbabwe for more stable contexts.

The new outgrowers: how have they fared?

In the years since, the sceptics have been proven wrong. Outgrowing on A2 resettlement plots is now a central part of the business, supplying 852,000 tonnes of cane in 2013 of a total throughput of 3.9 million tonnes. Yields are up too, with our sample of cane farmers producing 86 tonnes/hectare since 2009, higher than the estate average of 83 tonnes/hectare in 2014. Outgrowers must hand over 26 per cent of their crop to the mill, and pay additionally for irrigation water, transport and inputs. Many complain, but the company â€˜rips us offâ€™ and â€˜cheats on priceâ€™, but sugar growers have little option, and are tied intimately into the companyâ€™s operation. Tongaat Hulett makes considerable profit from its Zimbabwe business ($30 million in 2014), and land reform farmers are central to this. As part of the rehabilitation of cane land, the company (via the Canelands Trust, and supported until recently by over 30 million euros in aid from the European Union as part of the sugar adaptation fund) subsidises the replacement of cane, and improvement of infrastructure.

In our Hippo Valley sample, the average plot size is 24.3 ha (with a range from 9.8 to 58.1 ha), with on average 20.9 ha under sugar. Only four farmers (of 38) have centre pivot irrigation equipment, although everyone has access to canal water. Farm labour compounds exist both in the new resettlements and on the estate, from where labour for the range of sugar production tasks is derived. The new outgrower farmers on land reform plots come from a mix of backgrounds, including teachers, extension workers, estate employees, as well as well-connected politicians and security service personnel. Not everyone is doing well, and some recent arrivals have taken time to establish, but across our sample the levels of production and management are good. Making a go of sugar production is however tough, as explained in one our â€˜voices from the fieldâ€™ videos. Organising inputs, hiring and managing labour, dealing with cash flow, and negotiating with the company is always a challenge. But despite the early scepticism, the new farmers are by and large doing well, investing and accumulating, as well as providing employment and providing sugar for the profitable company mills.

The land reform in the sugar outgrower areas was not a â€˜land to the peopleâ€™ redistributive move to combat landlessness and poverty. This was part of an accommodation of a middle-class demand for land, creating a very particular type of outgrower arrangement, quite different to other sugar outgrower relationships elsewhere in the region, as discussed in other papers in theÂ Journal of Southern African StudiesÂ special issue. The A2 beneficiaries are certainly not universally powerful and well connected, but the sugar allocations were definitely not addressing the poor, disadvantaged masses. Nationally, the land reform had to accommodate multiple class interests, and one was the middle-class aspiration for land, particularly in the context of declining living standards, wages and job opportunities in the post-structural adjustment period.

Zimbabweâ€™s sugar politics since land reform â€“ and indeed much earlier â€“ involves a complex balance of competing forces. Large-scale international capital, seeing the opportunities for accumulation from the excellent climatic conditions and top-quality infrastructure and increasingly guaranteed supplies of irrigation water, has invested in the area over decades, despite the political and economic challenges. Tongaat Hulett sees Zimbabwe as central to its ability to make profit in the region, and so is prepared to weather the storms of economic and political crisis, and broker deals which are far from ideal.

Politically and economically, sugar is vital for Zimbabwe. Together with tobacco, these export commodities create a particular dependency politics, and are central to the imaginaries and processes of state-making. They are deeply implicated in both national and local politics. Today debates about indigenisation, restitution and resettlement colour these politics, and result in much rhetoric and frequent threats usually linked to the electoral cycle. But in essence the story is the same as it always has been; one about how the state makes deals with capital, and how farmers, and other local people, including workers, are incorporated, and on what terms.

It is such political-economic dynamics, rooted in often fragile, contingent elite alliancesÂ that have driven the transformation of the sugar industry, and with it the agrarian landscape in Zimbabwe since land reform. As has been the case since 1937, when Murray MacDougall first planted cane in the Lowveld, a contested political economy will continue to shape sugar, people and livelihoods over the next decades too. And the new land reform beneficiaries operating as sugar outgrowers will be central to the story.