HARARE, ZIMBABWE —In Zimbabwe, a tractor loaded with tobacco arrives at an auction floor in Harare driven by farmers from Hurungwe area, about 300 kilometers north of the capital. One of them is Felix Tarutsvira. Felix Tarutsvira, right, works with another Zimbabwe farmer to take their tobacco to an auction floor in Harare. They say they prefer the “golden leaf,” as it offers them better returns than maize, the country’s staple crop, March 2017. (S. Mhofu/VOA)

“I prefer [to sell] tobacco because when we compare prices, maize [corn] prices are lower than tobacco’s,” Tarutsvira said. “So as farmers want money quickly, they tend to grow tobacco.”But maize remains the country’s staple crop and, in an effort to recover from drought-induced food shortages, the government is encouraging farmers to grow more of it. 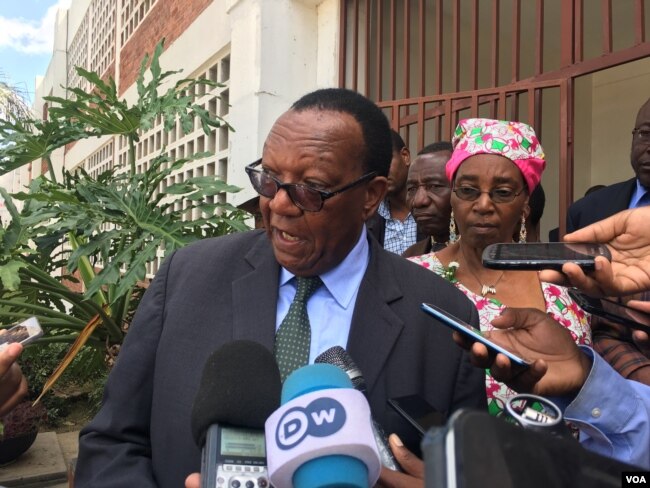 Zimbabwe’s minister of agriculture, Joseph Made, said that thanks to the “Targeted Command Agriculture” policy initiative, the country is on track to harvest enough maize for local consumption, March 2017. (S. Mhofu/VOA)

“By default many, many farmers would be producing maize,” he said. “But if … tobacco gives you three-four times over what maize is giving you, go for that which gives you money. Out of the proceeds of that high-value crop you buy grain, feed your family.”

Zacharia points out Zimbabwe could use the profit from tobacco crops to import maize that is more affordable.

“Even as a nation, we could put high-value crops in our fields, make the money that you require, import the grain. It [is] much, much cheaper than the current $390 that we buy it locally,” he said.

However, that approach can leave the country vulnerable in times of crisis.

The El-Nino-induced drought in 2015 and 2016 left Zimbabwe with serious food shortages. The government could not afford to import grain on short notice and ended up relying on aid agencies. An estimated four million Zimbabweans currently rely on food handouts from international organizations until this year’s harvest starts in April, according to the United Nations Food and Agriculture Organization.

Ahead of the 2016-2017 planting season, the government launched the “Targeted Command Agriculture” policy. The goal is ensuring food self-sufficiency. The government gave participating farmers maize seeds and supplies.

In return, the farmers will give the government five tons of maize per hectare at harvest time. The farmers keep the rest of the yield for themselves.

So far, the rains have been good this year, and Zimbabwe’s minister of agriculture, Joseph Made, said that, thanks to the initiative, the country is on track to harvest enough maize for local consumption — as much as two million tons. Bishow Parajuli, the U.N. resident coordinator in Zimbabwe, says recovery is under way.

“[In] Zimbabwe, we were facing lots of challenges when the drought came in,” said Parajuli. “But the proactiveness of the government and the strong partnership we did have addressed all issues of famine and hunger. Of course, there is food insecurity, malnutrition issues, and that is what we are working on at the moment.”

Next month, the Zimbabwe Agricultural Society will gather to figure out other incentives for farmers to plant maize crops in the hopes of easing the country’s perennial food shortages.