The leader of Renamo is banking on the government’s ability to produce a revision of the constitution, a law for electing governors and for financing the provinces by the end of 2017. 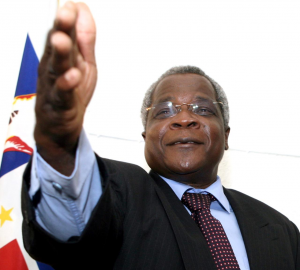 In an exclusive interview with DW Africa, the leader of Renamo, the largest opposition party in Mozambique, reveals that military forces have still not been withdrawn from the centre of the country, as announced by President Filipe Nyusi on Sunday (25 June). Dhlakama, who has condemned violations of the truce, says: “I am the one who can deal with the situation.”

DW Africa: What stage are the peace negotiations at?

Afonso Dhlakama (AD): Things are moving, but as you know, in Africa, these things are slow. We are negotiating. We created two groups: one for the decentralisation of state administration and the other for military issues. Regarding the decentralisation of the state administration, we intend to have a law that allows for provincial governors to be elected in 2019. From our side we have already made the proposals and we want things done. Specialists have been hired to advise the two sides, the government and Renamo, but there are always delays on the part of the government.

We understand that the government is marking time because Renamo intends to dismantle what exists at the moment, and governors will be elected by the populations of the provinces. This does not please some members of the government, but whatever the matter, it has become public and there is no way to prevent it from happening.

At the moment we are negotiating to permit the maximum certainty that by the end of this year we will have the law already approved in the Assembly of the Republic, that is, the punctual revision of the constitution, in order to allow, in fact, the law of election of the governors and the law of the finances of the provinces.

DW Africa: If the Frelimo government continues to mark time until 2019, a year in which the general elections should take place, what does Renamo intend to do?

AD: I have no alternative to offer. I just believe it would be shameless of the Mozambican Government, because the issue is no longer just for Renamo and Frelimo: it has become a national agenda item. And it is also of interest to the international community, by which I mean that the European Union, the Americans and even the Africans have eyes on Mozambique.

In fact, we did create a contact group, with observer status for the Americans, Chinese and the European Union. And from time to time they try to get information, and in fact want the governors to be elected in the 2019 presidential and legislative elections. Responding directly to your question, Renamo will not do anything, but the world will see who does not want decentralisation and free and transparent elections.

DW Africa: The Mozambican Armed Forces will have begun leaving nine positions in central Mozambique, according to a statement by President Filipe Nyusi on Sunday (25 June). Does this mean that everything in the negotiations on military matters is going according to plan?

AD: They are also slow. To explain: we are now negotiating the status of some of our officers – brigadiers, colonels and majors – in the Armed Defence and Security Forces. Here the situation is the same, it is marking time, but the understanding is that this military matter has to be solved before the end of September. That is, the integration of some of our military personnel in positions of leadership and the transfer of others into the police force.

These are not new things that Renamo is demanding: this was already been agreed in Rome, but in all these years the Frelimo government has not implemented it. And that is why the police are an instrument of Frelimo here, and part of the death squads and so on. Because everything here is politicised. So what we are trying to do is remove party influence from state institutions.

DW Africa: Renamo recently reported two cases of breach of truce in central Mozambique. How are these incidents being handled, given the greater understanding between Renamo and the government?

AD: In terms of breach, almost nothing has been said, specifically by Frelimo, since I declared the truce, because everything is already going very well. But, unfortunately, the government cannot control its military. And I do not say that these are central orders, because I don’t want to believe that President Nyusi would not be ashamed to do such things. But the military goes to villages, drinks, harasses women, stops cars on public roads and demands money. This happens every day in Gorongosa, before yesterday it happened elsewhere, this is constant.

A monitoring group has been set up which always reports this to the Party Chairman and me. But there has been nothing, we are only in readiness to observe and are limited to the promise to end this. Even so, I have assured the government that I will not retaliate or respond to provocations because I have granted a truce. If we respond, we will rekindle the war and the international community will say that neither Frelimo nor Renamo are any good. That is why at this moment I can say from the bottom of my heart that who is putting up with the situation, keeping the peace, is me, because my men are not responding to the provocations.

DW Africa: Some sectors of civil society claim the right to participate in peace negotiations. And in addition they fear an agreement that will be fallible, like the previous ones. At what point do you intend to include these voices in the negotiation process?

AD: My lady, it was never practical in the real world. What happened in Rome was the result of Renamo’s struggle for democracy. It was necessary to negotiate with the Frelimo government. And today we are negotiating issues still pending from Rome. How can a party that was never part [of the Rome Agreement] pull up a chair, sit down and negotiate? Negotiate what?

Because we are not only negotiating for negotiation’s sake, we have an agenda that Renamo has been presenting since its battles in the 80s. Now we acknowledge, and I understand as a political leader, that any Mozambican, any political party can have an idea and can hand it over to those who are negotiating. The MDM tried to write some things and also involved some intellectuals. But, in general, we do not think someone demanding to be part of the negotiations makes any sense.

DW Africa: Not even the MDM that represents the people in Parliament?

AD: The MDM is a little [pequenino] party with eight deputies. And even if it represents [the people] it is not part of Renamo’s agenda and what the [Renamo] party intends for Mozambique. As a party in the Assembly of the Republic, it [the MDM] has the right to submit its ideas, but it does not need to have a seat in the negotiations. This is not a matter of exclusion.