Politicians love helicopters, quick-moving aircraft that don't need a runway and can get you between meetings while others are stuck in traffic. 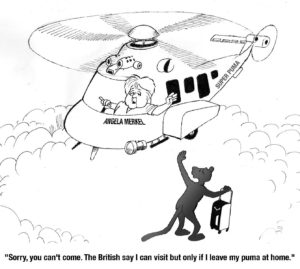 But in Britain and Norway, a ban on a model used by Ian Khama – and copied by the South African Air Force – has aviation experts shaking their heads.

Of the 24 countries whose airlines are banned from entering Europe, more than half are from Africa, including Air Zimbabwe.  According to the EU, the offending planes are not serviced to the right standard and pose a safety risk.

Air Botswana is not among them, but the national carrier’s furthest flight is to Cape Town and there are no plans to take it long-haul.

Ironically, President Khama’s helicopter, a Super Puma 225, is barred from British airspace and in Norway.  This has nothing to do with Botswana, and he could fly over all other countries in Europe, and the world. The Sultan of Oman and German chancellor Angela Merkel use the same aircraft.

The story of the British and Norwegian ban on this one aircraft has all the mystery of a detective novel, but with answers yet to be revealed.

Since the Super Puma was launched 40 years ago, thousands of lives have been saved by this most iconic of the helicopters, a giant workhorse in use from Africa to the Arctic.

But in 2016, an accident saw model number 225 (the one Khama flies) grounded in Britain and Norway. From a single-seater to a giant jetliner, mishaps in the sky are not taken lightly.

Parts are checked, airlines or the manufacturer may be asked to make modifications, and the plane is generally back in use within a few weeks.

And, sure enough, the 225 is flying again worldwide, except for an ongoing ban by the authorities in London and Oslo.

Some suggest the continued grounding is  really down to oil companies trying to ditch their contracts in the North Sea. When the price of oil was high, Pumas ferried crews to the rigs, but as crude fell – so the story runs –  firms who had used them for years claimed the choppers were unsafe.

The case has special relevance for South Africa where the air force has a locally developed version, known as the Oryx, based on the Super Puma and used for search and rescue, carrying troops and as a freighter for heavy loads.

Look at any national carrier, from Lufthansa to SAA, Singapore, Emirates or Air Zimbabwe, and you’ll find Airbus. Between them, the American Boeing group and Airbus based in France build more than 80 per cent of the world’s passenger planes.

In 2010, Air Zim ordered a pair of Airbus 320s but had to cancel for lack of funds and now has just the one, on lease.

For helicopters, the market is more diverse with manufacturers in Japan, Brazil, Russia, several in the US, and Airbus out of Marseille.

They ferry wealthy clients to a landing pad on the roof of Harrods in London, spray crops in Kansas and hover over Hwange or Kruger Park while rangers count game, tackle poachers or spray water on bush fires.

But when it launched in 1999, the 225 was in a class of its own: strong, fast and with a range of nearly a thousand kilometres.

Today they’re used by the military in Taiwan, France and Mali. They serve in the Japanese coast guard, as airborne fire engines in South Korea and for Australian search and rescue.

On the morning of 29 April 2016, a Super Puma 225 operated by the Canadian CHC group left a platform in the North Sea and made for the Norwegian town of Bergen, less than an hour away. On board were 11 oil workers and two crew.

The flight recorder would later show nothing strange about the journey. Then, as it made land at an altitude of less than 700 metres, locals say they watched the massive rotors come off and fall away.

It took just 11 seconds for the cabin to hit the ground, killing all 13 people.

A BBC report claimed the same aircraft was forced to land a few days early when warning lights flashed in the cabin, but contrary to the Airbus manual, the owners didn’t send it for service.

It would later be alleged that, before the helicopter was assembled, a truck carrying the gearbox was involved in a road accident, possibly damaging the part.  Investigators found a crack or fracture, and the gearbox had split in flight,  forcing the blades to come away.

To date, accident investigators in Norway have not found what caused the break.

Oil companies in the UK and Norway grounded all their 225s, except those used in search and rescue.

But in London, the Civil Aviation Authority went further, banning the 225 from British air space. Norway followed, and within three months, 80 per cent of the world fleet was down for inspection.

Quintin Frost is a South African pilot who has worked on all six continents, flying helicopters in Iraq, Botswana, the Swiss Alps and Zimbabwe.

“Lift a heavy load with any helicopter and it tips to one side, so the pilot has to compensate by adjusting the rotors,” he said from his home near Knysna in the Western Cape. “By contrast, the Super Puma goes straight up.

“But there are other things that make this a great aircraft. It probably has the best autopilot on the market, one of the few able to land by itself. And if for some reason the engine fails, you can tilt the rotors and they are wide enough to catch the wind, and the spin will allow you to float down safely.”

Statoil is among the world’s most profitable companies with operations in 36 countries including Angola. They were behind a recent discovery of gas in Tanzania and have partnered with the government of Mozambique to drill along the coast.

Headquartered in Oslo and with assets of more than $100bn, its biggest shareholder (67%) is the Norwegian government.

Statoil had chartered the doomed flight on 29 April. They grounded their own fleet of 225s, but then announced that all their Super Pumas would cease operation, opting instead for the US-made Sikorsky.

Slowly, the 225 moved back into use around the world, with just Britain and Norway insisting it stay out of service.

This has raised questions within the industry, including suggestions the ban may be linked to the low oil price given a majority of 225s in Europe ferried crews to and from platforms in the North Sea. Frustratingly there’s no evidence to show why the policy continues.

Once in the sky, other helicopters can fly without human control, but the 225’s autopilot will do a vertical take-off and landing, unaided. Sensors handle approach to even the smallest platform at sea, and an extra fuel tank can be fitted in under two hours, allowing greater reach.

More than 30 years ago the South African Air Force tasked Atlas Aviation (now Denel) to build a local helicopter. The template was a modified Super Puma.

And so was born the Atlas Oryx, arguably the most successful aircraft built in Africa. The Oryx still flies within both the Air Force and at the Helicopter Training School and is used in tourism and as a supply craft for bases in the Antarctic.

If officers from Pretoria fly to Harare for a meeting with Zimbabwe defence chiefs, chances are they’ll come in an Oryx.

And like the Puma, it has an enviable record for safety.

So where does that leave the 225, still banned in two countries?

“The grounding saw these helicopters being sold across Europe at way below value. This has spread them around the world. Pilots love them, they’re low on fuel and we see them now in Asia, the Americas and over Africa.”

Theories on why this one crash and the tragic loss of 13 people led to such a massive reaction continue to be debated: competing firms in the shadows, a falling oil price, the chance to wiggle out of contracts? It’s a tale we’re used to hearing in what Europeans might term, “corrupt African dictatorships”. But not in Europe.

Those imposing the ban cite health and safety while supporters – including many pilots and technicians – say one of the best aircraft ever built has been maligned, for reasons that are still unclear.

The South African Air Force has made no change to its use of the Oryx.

And there has been no sign of panic from Ian Khama, Angela Merkel and other heads of government.

When Zimbabwe recovers from its economic woes, this would be the perfect plane for sight-seeing along Kariba and Victoria Falls, even the Eastern Highlands.

In four decades, choppers have flown more than 65 million passengers to and from the North Sea oil rigs.

These are some of the world’s most treacherous seas, and the oil fields support some 300 000 British jobs.

Fourteen months after the accident, and after a full enquiry and a world happy to keep flying the Super Puma 225, it’s surely time for Britain and Norway to lift the ban or explain the mystery of why they are still trying to keep it out of the sky.