Rusape – Heavily armed Zimbabwean riot police this week besieged the property of a white commercial farmer, Robert Smart outside Rusape town and forcefully evicted him from his farm. 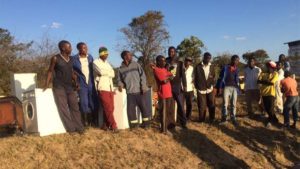 Workers at Lesbury Farm, about 26km west of Rusape, alleged that police fired live ammunition and teargas to disperse the labourers and villagers who had gathered at the farm in solidarity with Smart.

Some of the workers and villagers alleged that they were assaulted by the police, but no serious injuries were recorded.

One of the security guards at the farm, Reuben Chimombe, told News24 that the police officers and Zanu-PF youths ransacked Smart’s farmhouse before removing all the household property and throwing it on the roadside about 200m away.

‘Nothing is left in the farm house’

When News24 arrived at the farm at around 13:00 on Thursday, scores of Smart’s employees and ordinary people were guarding Smart’s property on the roadside while the police details loaded the last lot of Smart’s household furniture into their trucks.

“They (the police and Zanu-PF youths) ordered some of the villagers to slaughter a goat and prepare a meal for them while they removed Smart’s property from the farmhouse. Nothing is left in the farmhouse but we are going to sleep here in the open guarding our employer’s property,” said Chimombe.

Another farmworker, who identified himself as Innocent Chisasa, said the violent nature of Smart’s eviction was reminiscent of the ugly scenes seen at the height of Mugabe’s land reforms in 2000 when thousands of white commercial farmers and their employees were displaced.

Watch the video below.

“We were shocked when the police arrived and started to assault some of the farm workers and villagers using baton sticks. We do not want Smart to leave this farm because his family has been here since the 1930s. We see him as our brother and he has been spearheading all the development in this area, including using his own resources to repair the roads, building a school and ensuring that there are books in classes,” said Chisasa.

‘We are going to sleep in the open’

This reporter and another freelance journalist Garikai Chaunza were arrested upon arrival at the farmhouse where they intended to interview Smart and his family. They were detained for more than five hours at Rusape Police Station and released without charge after police deleted some videos and still pictures from their cameras.

As the journalists were being whisked away by the police, Smart’s son, Darrell, could be heard pleading with some of the police details to return a walkie-talkie communication radio that the police had seized from him.

One of the police officers, who seemed to sympathise with him asked him where he was going to spend the night.

“We are going to sleep in the open, cold as it is; we have nowhere to go,” said Darell in reply

Smart’s eviction came just a week after some villagers under the Tandi chieftainship approached the High Court seeking an interdiction against Lands Minister Doughlas Mombeshora and a top cleric, Trevor Manhanga with links to the ruling Zanu-PF, from interfering with operations at the tobacco growing Lesbury Farm.

The villagers accused the clergyman of grabbing the farm in order to erect a church on shrines that the villagers said were sacred, court papers showed.

The villagers also argued their ancestors were buried in the Machinya hills located on the farm and allowing Manhanga to build his church would violate their cultural rights.