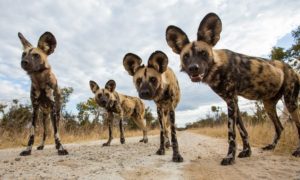 African wild dogs ‘live fast and die young’ and have lost most of their historic hunting ranges. Photograph: Will Burrard – Lucas/Barcroft

Rising temperatures are making it too hot for African wild dogs to hunt and the number of their pups that survive is plummeting, according to a new study. The research is among the first to show a direct impact of increased heat on wildlife that appears well adapted to high temperatures.

There are only 7,000 African wild dogs left in the wild and they have lost 93% of their historic ranges to humans. Research earlier in July suggested that a “biological annihilation” of wildlife in recent decades means a sixth mass extinction in Earth’s history is already under way.

African wild dogs leave their young pups in dens when they set off for their early morning and late evening hunts, avoiding the worst heat of the day. The scientists found rising peak daily temperatures in Kenya, Zimbabwe and Botswana cut the time the dogs were active and the survival of the pups.

In Botswana, where the team had the longest records, they found the average number of pups surviving to a year old in each litter fell from 5.1 between 1989-2000 to 3.3 between 2001-2012, with temperatures rising 1.1C between the two periods. In Kenya, a 1C rise in the peak temperature cut yearlings by 31% and in Zimbabwe 14%,

“When people think about climate change affecting wildlife, they mostly think about polar bears,” said Prof Rosie Woodroffe, at the Zoological Society of London and who led the new research published in the Journal of Animal Ecology. “But wild dogs are adapted to the heat – surely they’d be fine? So it is shocking and surprising that even right on the equator these effects are being seen. It illustrates the global impact of climate change.”

African wild dogs need large hunting ranges to survive, about 800 km squared for the average pack of nine, equivalent to the area of New York City. But the projected rises in maximum daily temperatures due to global warming are ominous, said Woodroffe: “It’s really scary. It is possible that some of these big areas will become too hot for wild dogs to exist.”

The dogs’ highly energetic lifestyles makes them susceptible to losses of food when it is too hot to hunt antelopes. “Wild dogs live fast and die young,” said Woodroffe. “They have these huge litters [of up to 14 pups] and then the mortality is quite high.

“If you are an animal who makes your living by running around really fast, obviously you are going to get hot. But there are not enough hours in the day any more that are cool enough to do that. This is something which is genuinely suppressing population size.”

Other new research also warns of the consequences of global warming for animals normally tolerant of heat. Aardvarks in the Kalahari desert, usually nocturnal and burrowing animals, died of starvation during a particularly arid spell, with scientists concluding: “With climate change predicted to increase the frequency and duration of droughts, aardvarks may be [eliminated] from much of their current range.”

Another new study has shown that the African wild dog is far from alone in losing more than 90% of their historic ranges. The Ethiopian wolf, red wolf, tiger, lion and cheetah have all suffered the same fate, with scientists saying reintroductions are essential to ensure their survival.