Heal Zimbabwe condemns the organized acts of politically motivated violence that have continued to disturb the prevalence of peace as the 2018 elections loom. On the night of 18 July 2017, unidentified youth aboard two pickup trucks destroyed the windows and durawall of a house belonging to Kuwadzana ward 38 Councillor, Wilton Njanjazi (MDC T). 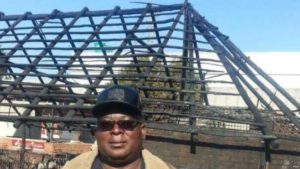 Narrating his ordeal to Heal Zimbabwe, Councillor Njanjazi said that the security personnel at the house said around 1am, he saw two unidentified vehicles approaching the house. When he approached the people in the vehicle, they produced a gun and ordered him to lie on the ground. Several youths then started destroying the durawall and then proceeded to the house and started smashing window panes.

In a separate incident of arson, a bar belonging to the MDC-T Vice President along Coventry road in Harare was burnt by unidentified people on the same night. VP Mudzuri highlighted that he was shocked by this targeted attack and said that whoever performed the attack had ulterior motives. Speaking on the same issue, security personnel at the bar said that around midnight, a Mazda BT50 truck came and parked in front of the locked bar gate. Five men then proceeded out of the car and smashed the gate and gained entrance into the premises. Within minutes the men had set ablaze the thatched bar.

These latest criminal incidences come hardly a week after a vehicle belonging to the MDC-T was burnt in Kuwadzana in yet another suspected case of arson. Heal Zimbabwe notes that such acts of targeted attacks compromise the prospects for peace as the nation gears up for the 2018 elections. Heal Zimbabwe posits that such acts of political violence also justify why Heal Zimbabwe has been imploring Government to fully operationalize the National Peace and Reconciliation Commission (NPRC), a commission charged with developing mechanisms for early detection of areas of potential conflicts and disputes, and to take appropriate preventive measures. Heal Zimbabwe also implores political parties to reign in errant supporters who perpetrate violence. The police must also launch a thorough investigation and apprehend the culprits.