‘Sharon and Mugabe’s elephants’ is what Natural History Unit Africa originally planned to call this award-winning elephant documentary filmed in 2011 on the Hwange Estate in the west of Zimbabwe. 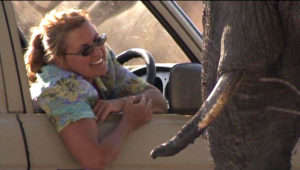 Sharon Pincott during the filming of All the President’s Elephants

“I had no editorial say, but I did beg them not to call it that,” Sharon Pincott tells The Zimbabwean. “I had no idea this documentary would be so well received around the globe. By 2011 I’d already released four successful books about my work with the Presidential Elephants and this was a strange environment to dare to do well in. I had no desire to ‘poke the numerous bears’ further. So, yes, I did ask them back then to please think harder about their planned title.”

Ultimately named All the President’s Elephants, those who understand Pincott’s years of dedicated elephant conservation work, her drive and tenacity, would never have doubted it would be another triumph for Hwange’s elephants. Debuting in 2012 at the Durban International Film Festival, and later a finalist in every wildlife category – including Best TV Wildlife Program – at the 2012 South African Film and Television Awards (the African equivalent of the Oscars), it went on to garner further acclaim at various international film festivals around the world.

Neither Pincott nor the documentary has disappeared, despite her sudden departure from Hwange three years ago, in May 2014, after 13 years of full-time work with the Presidential Elephants of Zimbabwe. “At that time, I just couldn’t do it anymore,” Pincott concedes. “For over a decade I’d stayed focused on goals and targets, despite unbelievable trials and tribulations, doing what those elephants needed done as my own savings allowed. By 2013, though, it had become an environment of corruption, greed and threats, lack of ethics, and just too many inflated egos. To top that off, I was suffering from burn-out. There’s only so many times you can bash your head against a brick wall.”

Regardless, All the President’s Elephants in which Pincott features, continues to enjoy critical acclaim and has been dubbed in Polish and subtitled in French. The French version was retitled La Gardienne des Éléphants – The Elephant Guardian – matching the name Pincott was frequently called in Zimbabwe, alongside her Ndebele name Mandlovu, which means Mother Elephant. It is a one hour film that was later shortlisted as a finalist in the prestigious 2016 International Elephant Film Festival, where the world’s best elephant films from the previous nine years were celebrated.

Most recently, All the President’s Elephants has been acquired, in a non-exclusive deal, by the broadcasting giant Blue Ant Media, and is now available for streaming on demand in more than 60 countries around the world, where ever the Love Nature app is available, including the UK and Australia. “The USA is yet to acquire it,” Pincott tells us, “although I understand that sales efforts are still underway there. In South Africa, a special deal has been done and the DVD is once again available for purchase online from the likes of Loot.co.za.” As with her years of full-time voluntary work in Hwange, Pincott receives no royalties. She is, she says, pleased that Love Nature do contribute a portion of their revenue to various wildlife conservation programs.

Pincott’s associated book, Elephant Dawn, first released in June 2016, also continues to enjoy high praise. “I’m really grateful to all of those who continue to make contact, letting me know how much they enjoyed it, with feedback filled with so much joy, but also often with deep sadness too.” Availability online, from Amazon, BookDepository and others, ensures that Elephant Dawn remains easily obtainable world-wide, and more than a year after release Pincott still makes time for interviews. She is scheduled to speak in person at Australia’s Sunshine Coast Readers and Writer’s Festival in August. “The release of this book has been a particularly memorable experience for me, and one that hasn’t seemed to stop. Combined with the documentary, more awareness has seeped into hearts and minds in all sorts of odd and varied places around the world, helping me to realise, and be thankful, that I’ve exceeded my own goal of raising increased awareness for the plight of elephants in Africa.” Next year’s calendar already has dates blocked off. If she is able, Pincott plans to take up an invitation to spend time with school students in China.

All of this has not been without difficulty however. One minute Pincott was on the ground in the African bush, battling never-ending threats, intimidation and incomprehensible obliviousness, while at the same time having become a well-known champion voice for elephants, doing all that she could to help keep her 500 and more wild Hwange elephant friends, known intimately to her, alive and in the spotlight. Sadly, the next minute she was a First World public hospital patient battling a range of health issues that threatened her life as she knew it, and indeed her life itself.

These days, Pincott endures a rare, chronic, systemic, connective tissue disorder for which cancer and organ transplant medications are prescribed, reluctantly, in an attempt to slow and relieve, although they do not cure. “There is no cure,” Pincott tells us matter-of-factly. “If the illness itself doesn’t kill or impair you quickly enough, the drugs just might. My array of different medications is already mind boggling, yet I have little choice but to now progress to additional more toxic treatment,” she states resignedly.

Sharon Pincott longs to see a wild elephant again and very soon will be on her way back to Africa to do just that. “With good friends to help me manage, Botswana is where I’ve decided to spend the bulk of my time away. In terms of wildlife conservation, it’s a great country to support. I’ll also be spending time with other friends in South Africa.”

There is a smile in her voice as she speaks of this, the sweet smell of elephants within her grasp, but even that voice sounds different these days, affected by the progression of her illness. “Nothing is as it was,” she says, “but it has resulted in a whole extra assortment of valued friends and colleagues. Everything happens for a reason.” When asked if she has plans to stop off in Zimbabwe in between visiting the two other Southern African countries, Pincott is noncommittal. “Right now, my body can do without Hwange,” is all that she divulges. “Coming across a known elephant family with members now missing would have me spiralling backwards. The thing is, I would notice. On this trip, I’m seeking peace and relaxation, and other elephants to help soothe my body and soul. I hope to stumble upon happy stories, in amongst the seemingly endless wildlife gloom we continually hear about.”

“There’s still more awareness needing to be spread about elephants yet,” Sharon Pincott declares. And as always it is crystal clear that she will successfully help to achieve this.