One of the surviving sons of Cecil the lion has been filmed in the wild a month after one of his brothers was shot by a hunter. 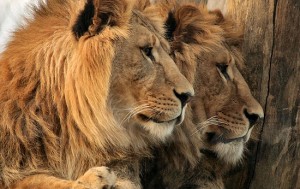 Bhubezi the lion was seen mating with a female lion in Zimbabwe’s Hwange national park on Thursday.

The sighting comes a month after his brother Xanda was shot just outside the park close to where their father was controversially killed in 2015.

The six-year-old lion, who was in his prime, was wearing an an electronic collar fitted by researchers monitoring his movements in the area when he was shot. The professional hunter on the shoot handed the collar into authorities after the hunt in July.

Cecil the Lion’s death on July 1, 2015, caused global outrage and threw a spotlight on trophy hunting in Africa.

The Telegraph broke the news that Walter James Palmer, a 55-year-old dentist from Minnesota, US, was discovered to have paid US$65,000 (about £50,000 in today’s exchange rate) to shoot and kill the much-loved lion with a bow and arrow.

He was forced to abandon his practice in suburban Minneapolis for weeks amid an international outcry over his actions.